Who Wants a Free Trip to Cartagena, Colombia?

I’ve ranted and raved about Colombia in the past, particularly... 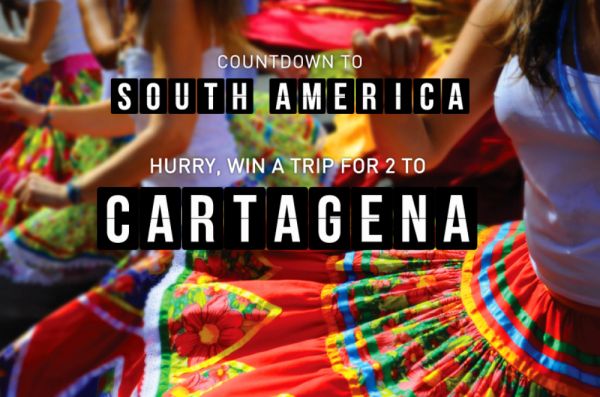 I’ve ranted and raved about Colombia in the past, particularly the city of Cartagena, so when LAN Airlines approached me to help them promote their new “Countdown to Cartagena” sweepstakes, I was immediately onboard. The contest, which runs until September 4, 2014 at 11:59 PM EDT, will see two lucky winners flown round-trip to Cartagena from anywhere in the U.S., then put up at the luxurious Casa San Agustin Hotel, located within the walls of the UNESCO World Heritage city, for three nights.

The Old City of Cartagena

Officially known as “Cartagena de Indias,” Cartagena was founded in 1533 by explorer Pedro de Heredia and quickly became one of the jewels of the Spanish crown. Although the modern Cartagena metropolitan area is home to more than a million residents, and in many places bears more resemblance to Miami than medieval Madrid, a stroll through Cartagena’s walled city is a veritable trip back in time. As you traipse through cobbled streets, past colorful row houses and under ornate balconies, you’ll wonder whether you’ve accidentally stumbled back to the 16th century, to say nothing of timeless sense of paradise the city’s palm trees and bougainvillea vines evoke. Watch a traditional dance performance in the Clock Tower square, enjoy sunset cocktails at Café del Mar or simply look out over the Caribbean from atop the old city walls.

Cartagena is one of the most magnificent cities in the world, but the natural beauty of Colombia’s Caribbean coast takes it to a whole other level. One treasure that’s easy to discover on a day trip from Cartagena is Totumo Volcano, accessible via your own private car or an organized tour from the city center. Unlike some of the other volcanoes I’ve visited during my travels, Totumo Volcano doesn’t spew lava and isn’t particularly dangerous. It does, however, provide an amazing view of the surrounding Colombian countryside – and it’s the best place in the world to enjoy a soothing mud massage.

Speaking of day trips, if you’re in search of sun and surf while in Cartagena, you owe it to yourself to catch a morning boat to nearby Isla de Barú. Here, you’ll find one of the most idyllic beaches in the entire Caribbean: Playa Blanca, or “White Beach,” named for the sugar-like sand that lines its shores. Once you’ve taken a first dip in the crystal clear, turquoise-tinted water, retire to one of the charming huts nestled in the island’s thick palm forest. Relax in a hammock, whether you catch up on reading or simply catch a few winks, then enjoy a dinner of fresh-caught pescado frito before watching the sun sink into the sea and heading back to Cartagena.

Your Gateway to Colombia

Cartagena is not only an amazing destination in and of itself, but makes the perfect gateway to the rest of the country – Cartagena is a great place to begin your Colombia journey, but it needn’t end there. Travel eastward along the Caribbean coast to the lush Tayrona National Park, visit the vibrant Colombian cities of Bogotá and Medellín or trek deep into the emerald hills of the Coffee Triangle.

Ring in the New Year with a Free Trip to Rio

It’s no secret that I love South America – the most popular post on this site is a sample itinerary...