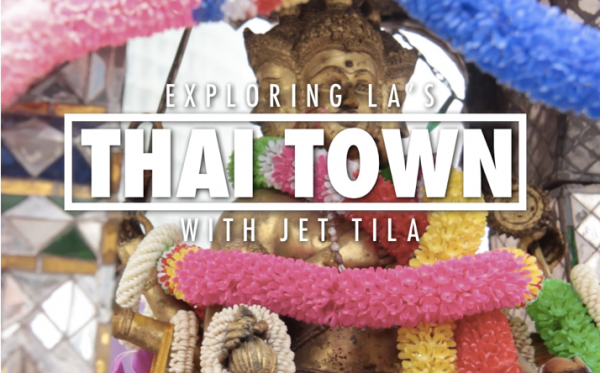 Home to the largest population of Thais outside of Thailand, Los Angeles is known as Thailand’s 78th province. It’s also home to the only officially recognized Thai Town in America (located in East Hollywood along a six-block stretch of Hollywood Blvd between Normandie and Western Avenues).

And with tens of thousands of Thais in Los Angeles, it’s no surprise that LA is one of the best places in the world, outside of Thailand, to eat delicious and authentic Thai food. So to help me discover and understand LA’s vibrant Thai culinary scene, I enlisted the help of Food Network personality, restauranteur, lifelong Angelino, and America’s Thai Culinary Ambassador (as appointed by the Royal Thai Consulate), Jet Tila.

You may know Jet as a judge on Food Network’s Cutthroat Kitchen (he was also a long time guest judge on Chopped), or from one of his many TV appearances on shows like Anthony Bourdain’s No Reservations and Parts Unknown, The Today Show, Iron Chef America, and The Talk, just to name a few. And if you don’t know Jet (beyond meeting him in the video you’re about to watch below), you likely will one day soon for one of the many projects he has up his sleeve.

Together, Jet and I began our day at his family’s Thai market to learn about essential Thai ingredients, then ate at one of his favorite Thai restaurants, followed that up with some Thai deserts, and finally, left Thai Town to see how Jet’s culinary empire spans way beyond Thai cuisine at his newest venture, Stir Market. Enjoy.

Bangkok Market - Founded by Jet’s parents in 1972 (six years after immigrating from Thailand), Bangkok Market was America’s very first Thai Market. Today, it carries over 7,000 Southeast Asian products — and since Jet spent his entire childhood stocking the shelves after school, he knows them all like the back of his hand.

A few times per year, Jet takes a small group of hungry people on a culinary tour of Thai Town with Melting Pot Tours (Bhan Kanom Thai is on the tour, the others places featured in the video are not). The only scheduled date remaining in 2015 is on August 16th, and as of right now, spots are still available. Tickets are $125 and you can buy them here.

Trevor Morrow is a men's lifestyle writer taking you past the internet clutter and straight to the travel, food and gear that are most worth your time, energy, and money.

By Adam Groffman Gotta love that skyline! Bangkok is always impressive. This week I’m in Thailand for the first time...