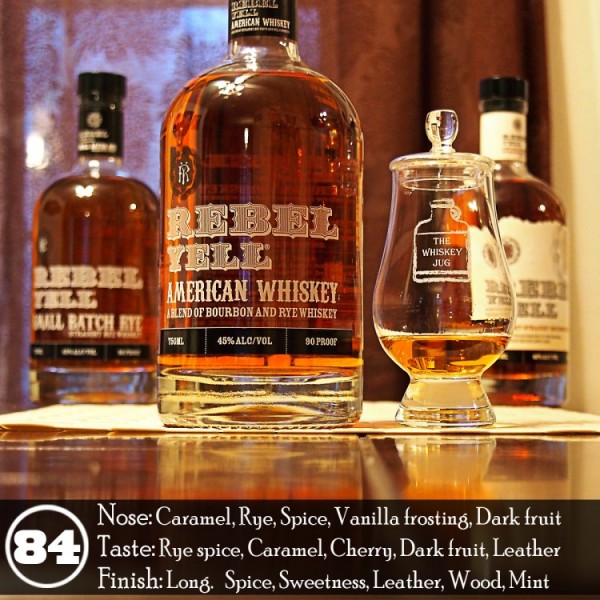 Rebel Yell American Whiskey is a blend of 2 year old Rebel Yell and a 2 year old MGP rye. This puts it in the same bourbon and rye blend category as High West’s Bourye and Son of Bourye and Wild Turkey’s Forgiven. The main difference being that, unlike the HW & WT, the Rebel Yell American Whiskey uses a wheated bourbon instead of the high rye bourbons used in the other two. Age would be the other big difference as this is quite a bit younger than the other 3.

it’s kind of fun to see a brand that’s seen so little innovation over the years start to do something interesting and new. While the core concept of a bourbon and rye blend obviously isn’t new, the use of a wheated bourbon in the blend is and brings something a little different to the table. It could definitely use a few more years in the barrel to give it some added depth and complexity, but it’s shockingly tasty for A) being Rebel Yell and B) being so young. Now if only they could address the namesake and make it more of a yell and less of an “indoor-voice”.

PALATE
Rye spice moves across first towing notes of caramel, cherry dark fruit, leather, oily toasted nuts, some citrus peel and vanilla with a light bit of cocoa powder on the back end.

FINISH
Long and spicy with a good bit of sweetness, leather, wood and mint.

OVERALL
Rebel Yell American Whiskey = the sweetness of a wheater + the spice of a young rye and is exactly what Rebel Yell needs. It’s no secret that I’m not a huge fan of the regular Rebel Yell, but add some 2 yr MGP rye and boom… it tastes MUCH better. The rye spice covers up the flaws – giving it the body it needs. Without a doubt this is the best whiskey in their current line-up and if it clocked in around the 4-6 years mark I’m sure it would soar with the added depth. Though even with it as-is it’s a Rebell Yell I might actually keep in the house and that’s something I never thought I’d say about a bottle of anything labeled Rebel Yell… well done Luxco.