My Travel Tattoos & What They Mean To Me [Mini Photo Essay]

Having a selfie tattoo photo shoot in my apartment I’ve...

Having a selfie tattoo photo shoot in my apartment

I’ve always thought of my body as a canvas. Piercings, crazy hair colors and styles, statement piece clothing and tattoos have always helped me express my personality and interests in a way that made me feel confident. I consider myself a bit quirky, somewhat alternative and very passionate, and tattoos have helped me show this to the world, scream it loud without actually making a sound.

I often get people say to me, “But, what about when your 80 and your skin is saggy?”

“When I’m 80 my body will be a canvas of memories from the full life I led,” is my reply.

“But, how could you get something permanent on your skin? What if you change your mind?”

“All my tattoos are about travel. I’ll never change my mind about that.”

One of my best blogger buddies is Seattle’s Travels, who hands down possesses the most beautiful, inspired and well-placed travel tattoos of anyone I’ve ever seen. While I’ll probably never reach her level of tattoo-dom, I’m still proud to show off the five-and-counting that I’ve got.

Note: Most of my readers know I live in NYC, so you’re probably wondering why all of my New York tattoos were gotten outside of the actual city. The answer: NYC is fricken expensive for tattoos! I’m talking triple to quadruple the price of what I pay taking a train an hour outside the city to get it on Long Island. If you want to get a tattoo in NYC there are plenty of great places; however, you’re going to pay a pretty penny.

Note Note: The following photo essay was taken of me, by me, in my apartment with the help of my new Godox Digital Timer Remote, which basically let’s me program my camera to take as many photos as I want without me needing to ever touch my DSLR. Pretty sweet. And less than $15.

This is the worst photo of the group because, well, I HATE FEET and took this photo quickly to get it over with. I especially hate toes which is why it’s so close up. So why did I get a tattoo on my foot? I have no idea.

This was my first tattoo I got when studying abroad in Australia at the age of 20, almost eight years ago. I still remember how nervous I was getting this small foot design, how I squeezed (and at times chewed) a magazine for dear life from the pain.

My best friend while studying abroad — still a great friend today — was a girl named Kait, and we decided we wanted matching tattoos to remember our study abroad experience. We were in love with how the locals always seemed to say “no worries” for everything. They phrase also seemed like a simple yet positive mantra to live by. Moreover, we were constantly traipsing over beautiful yellow, pink and white flowers, called frangipanis, which we added to the design.

I’ll admit the tattoo was much brighter when I first got it. People would actually stop mid conversation and stare at my foot if I had sandals on from the hot colors. Maybe one day I’ll get it touched up.

I got this tattoo in Sydney, Australia, somewhere around George Street in the Central Business District, but unfortunately it was so long ago I don’t remember the name of the place.

After spending a summer in Southeast Asia I decided I wanted to get a vine of Thai flowers crawling up my side. I printed numerous flower photos, as well as a picture I’d found online of a girl with a rose vine going up her side. I asked the tattoo artist if she could keep the idea of the rose vine but incorporate the Thai flowers; however, none of the drawings really touched me.
For fun, she also drew her own interpretation of a rose vine, and I immediately fell in love.

While I went with the roses, the tattoo still reminds me of my wonderful trip to Thailand, because that is what inspired me to make the trip to the tattoo shop in the first place.

I got this tattoo in Albany, New York, at Lark Tattoo. 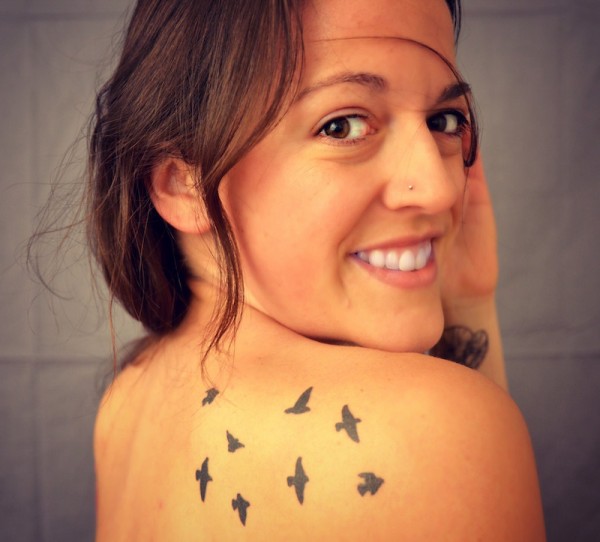 As a runner, I’m not a huge fan of birds. That’s not to say when I travel I don’t love bird watching or see some exotic species in the jungle; however, for the most part I’m reminded of the times I’ve had pigeons crap on my head while going for a morning jog (yes, it’s happened to me more than once!).

That being said, is there any better symbol of freedom and flight then birds? I think not. As a traveler, I like to think that I’m like a bird, spreading my wings and taking off for the next destination, always on the move. That’s how I love to live my life.

My mother, who hates tattoos, always tells me that this one is her favorite of mine.

I got this tattoo at LI Ink on Long Island in New York. I believe the artist was named Sean.

Another symbol of freedom and flight — and a major representation of travel — is the plane; however, I didn’t want some bulky Boeing drawn on my crotch. I wanted something whimsical, fun and slightly sexy. So, I logged onto Pinterest and started searching until I found this.

When I posted a collage of four tattoo ideas and asked people to vote on social media what I should get, the paper plane won by a landslide. While I always like to customize my tattoos a bit when I find the designs online, I was too in love with this one to make any alterations.

It’s on my hip/pelvis area, drawn to curve with the lines of my body. I love how simple yet powerful it is, at least for me.

I got this tattoo at LI Ink on Long Island in New York. Artist : Justin.

Anyone who reads my blog regularly knows my bike is something I couldn’t live without. Not only do I love riding to get around NYC, but it’s my favorite way to travel as you can truly feel the beat of the destination you’re in. So, I decided that I would dedicate my wrist to a bike design.

And this is where my blood starts to boil a bit.

My original idea was this chunky bike design, a simple but artistically drawn bike without spokes. I told the artist he could get a bit creative and change it a tad, and when he was done with the drawing I really liked it; however, when he actually drew it (permanently) on my skin he added some lines inside the wheel for a lighting effect. Neither myself nor my friend who was with me could recall this effect from his original drawing. To both of us they looked kind of like half-drawn spokes and didn’t see his vision, so I decided to have him just make them into spokes.

The tattoo ended up being a lot more detailed than I wanted, and the bike is large that when I move my arm the skin on my wrist twists and it becomes distorted. While I love that I have a bike tattoo, it’s definitely my least favorite and one I wish I could re-do.

That being said, a good friend of mine answered my disappointment by saying, “You love bikes and the tattoo has meaning. It’s perfect for you.” I’m deciding to take that attitude. Also, one of my Instagram followers suggested I get another artist to weave colorful flowers through the spokes to make it into a funky design, an idea I think is genius.

I got this tattoo at LI Ink on Long Island in New York. Artist: Justin.

*The Godox link above is an affiliate link, meaning I make a small commission if anyone purchases one through the link. I am not sponsored by Godox and purchased mine with my own money (and love it!).

Transportation Stories: Notes On Being A NYC Bike Commuter

That Time I Rode The NYC Subway…Without Pants [Photo Essay]

Charlie Hebdo: “I’d Rather Die Standing Than Live On My Knees”

The post My Travel Tattoos & What They Mean To Me [Mini Photo Essay] appeared first on Jessie on a Journey.

Jessie on a Journey

Jessie on a Journey is an award-winning blog focused on solo travel, adventure and offbeat experiences.

In the long going quandary of wanting to get a tattoo or not, this fantastic collaboration between McQ and cult...