Pinterest
Facebook
Twitter
Expand social
Gplus
Email
Ok, a day late on this one, sorry folks. I swear I'm back on the regular schedule, but was away for part of the weekend and not as productive as I planned for the rest of it, so, sue me.
Anyway, as I’ve mentioned (probably tirelessly), I just took a big leap and moved to NYC, in large part to pursue a full-time career in men’s apparel. It’s been wildly exciting, and I have a lot of potentially awesome opportunities in the pipeline, but inherently, part of that leap meant quitting my old job in Chicago, and being temporarily unemployed. And something I’ve realized over the past two weeks, is that it’ tough to be a broke menswear blogger.
As I sit here researching and writing articles, or even ‘background’ reading all of my favorite blogs and periodicals, I’m just surrounded by things to buy. With a regular income, I temper my desires for absurdly expensive shoes and suits by scoring bargains on slightly less, but still significantly drool-worthy duds, or even just improving my basic wardrobe. When I’m completely broke, though, it’s like having an addiction, with no fix! I can’t even get a little taste! Sheesh!
So, as a result, I’ve (vaguely counter-productively) been putting together a list of things I really want, but totally can’t afford. And not even ‘can’t afford while I’m broke,’ but really ‘things I will have to save up for (or score on eBay if I’m lucky). A 'personal grail' list, if you will.

I’m sure I’ve got a zillion other things on the list (such is the life of a struggle blogger with expensive taste), but the following are the things I’m really lusting after this fall. The list:

Alden Longwing Bluchers ($687 at Unionmade): I’ve actually needed new shoes since, oh, maybe mid-spring, and just haven’t been able to bring myself to buy the kind of pair that I could afford. Instead, I’m oh-so-stubbornly holding on on these beauties, which are probably my dream pair. Sure, there are others that come close (maybe an AE Strand in shell cordovan), but something keeps bringing me back to these. I love the versatility, the American, kinda preppy aesthetic (as opposed to a more sleek, European shoe), the Alden heritage, the burgundy color, the cordovan leather - it's the one pair of shoes I could probably wear every damn day. 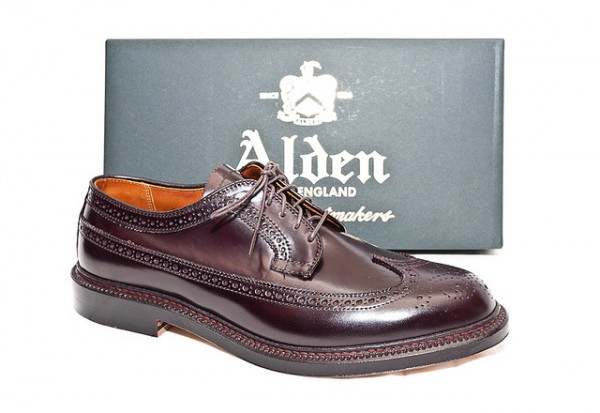 Longwing Cordovan Blucher | Alden via Unionmade
Some sort of (very specific) boot (Alden Indy currently $512 at NeedSupply): Ok, ok, this one is pretty vague, and therefore a bit of a cop-out for a wish list, but I’ve been dying for a pair of nice boots for so long. The problem is, I keep waffling about what kind of boot I want. I know what I don’t want...I don’t want something chunky, or with a bulbous toe (goodbye Red Wing and Wolverine), I know I don’t want a Chelsea boot, or any kind of strictly dress boot, I know I don't want something with a glued sole, I know I don't want anything with zippers...should I go on? Beyond that, I know I want brown or Merlot, I know I want it to be relatively sleek through the toe-box, and I want it to be just rugged enough to deal with the elements without me coddling them. So, do I want a more casual boot, like the Viberg Service Boot or Alden Indy? Or do I want something I can wear with a tweed or flannel suit, like the Meermin Tan Country Calf, or the Allen Edmonds Dalton? All I know is, it’s gonna be expensive. 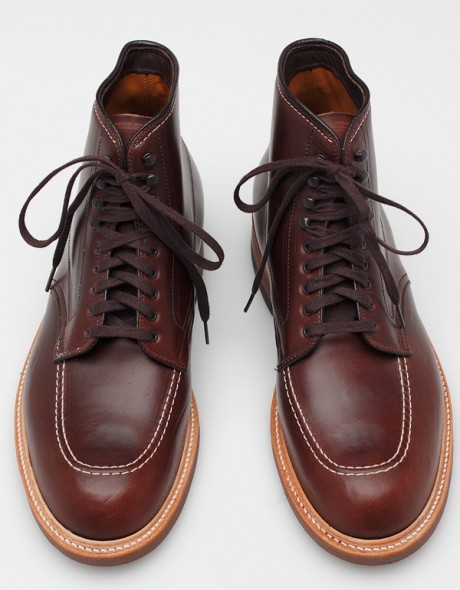 Indy Boot Chromexcel | Alden via NeedSupply
A leather bag (Frank Clegg brief currently $1140): This has been on my radar for a while, but was just recently hammered home by some recent posts on some of my go-to blogs. While I don't necessarily want a hard-top briefcase (yet), I really connected with this post on TSB, and the assertion that men have kind of forgotten the formality/elegance of a proper, non-casual bag. Personally, I'm not sure if I'd go for a brief or other every-day bag (which I'd inherently get more use out of), or a weekender or duffel (which I just love the look of), but I know a gorgeous, shrunken-grained, buttery-soft beauty would just fill a gaping hole in my heart (isn't hyperbole fun?). Not a connoisseur by any means, but something like this pick from Frank Clegg just tugs at my heartstrings. Editors Note: Holy hell these things are expensive...I mean I knew they weren't cheap, but I went to pull the product link for this...oof. 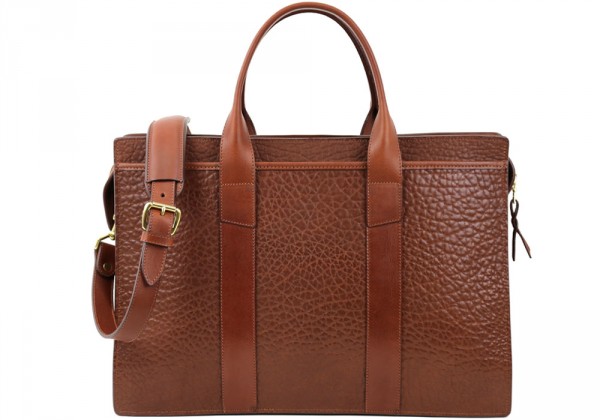 Zip-Top Briefcase | Frank Clegg
Baracuta G9 Jacket ($390 through the Baracuta store): Ever since I've gotten into style, I've wanted a classic Baracuta to emulate some Ben Wyatt style. Now this one is a bit frustrating, because I honestly am not 100% sure it’s worth the crazy high price point. Also, you can find knockoffs for just fractions of the price. But maybe something about those knockoffs is just too noticeably different to me, or maybe I’m hooked on the Baracuta name, but whatever it is, I want one. This is for sure one I’m hunting the eBay for. But good luck to me, finding one in the right shade of dark khaki (which the below is not, but close), in a small, in good condition and a modern cut...and all the other stupid shit I’m picky about. 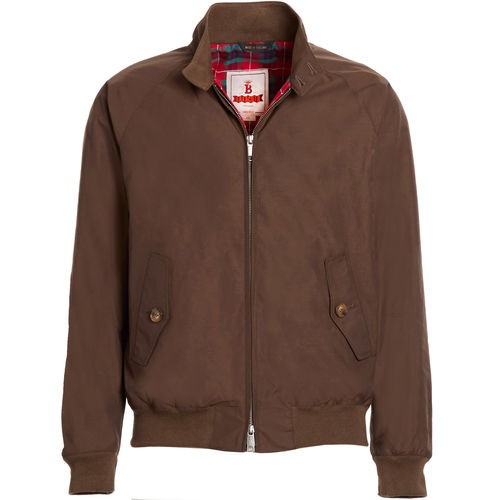 G9 Original | Baracuta
Barbour Waxed Bedale ($380 at Orvis): A bastion of NE, preppy fall style (though it's origins are British), the waxed Barbour. Starts out shiny and new (and, from what I’ve heard, very waxy), develops a beautiful patina over time...honestly, this is one I might be better off buying used, and finding something with an already lovingly-worn-in look. And yeah, not out-of-the-world expensive for outerwear, even new. But I kinda want that worn-in look to be my own, and I’ve never before bought a coat at market price, so here it lands on my dream list. 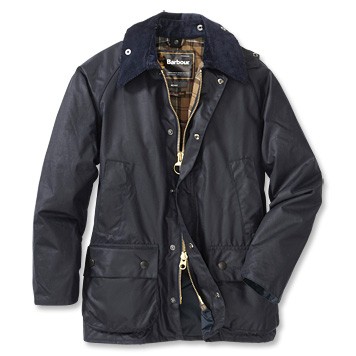 Bedal Jacket | Barbour via Orvis
Brooks Brothers Regent Hopsack Blazer ($598 at Brooks Brothers): Surprisingly the only piece of tailored wear on this list (this time around, at least), I’ve been dying for a hopsack blazer since spring. It’s like, the perfect fabric. It’s wool, so it won’t be ‘out of season’ to be worn in the fall, spring, or winter, but the coarse fabric and open weave make it breathable enough to wear in the summer (as long as there’s a bit of a breeze). Plus, the texture of the thing sets it apart from your everyday, smooth and shiny worsted wool. It’s pretty much the perfect go-to blazer, but unfortunately a relatively hard-to-find fabric at lower prices. The Regent cut from Brooks Brothers would be perfect for me, in a slightly slimmer fit, just over 1/4 lined (though to be honest I don't really know what that means), expensive enough to indicate quality but not wildly pricey...yep. Normally I’d find an affordable alternative, but I’ve been ‘making do’ with the blazers I have for long enough that they are starting to wear thin, so I think this deserves a spot on the covet-for-later list. 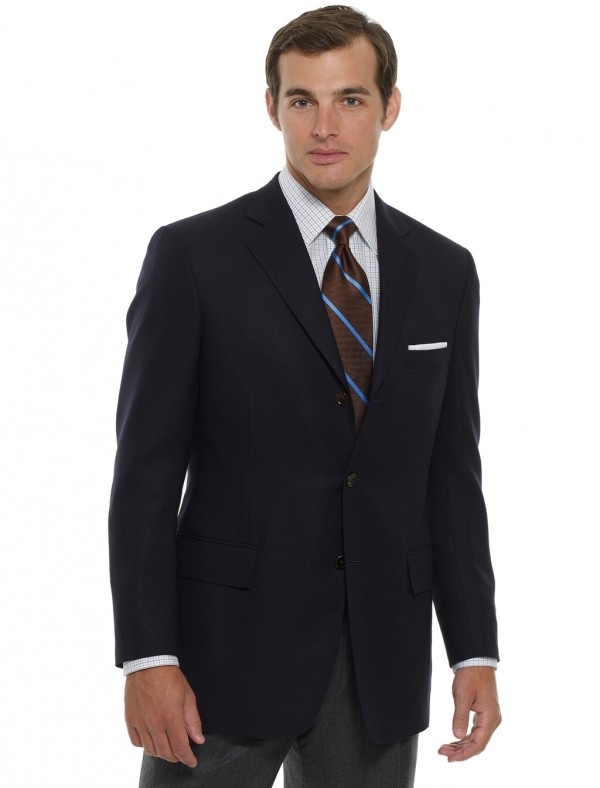 Ok, it's time for me to stop drooling over expensive menswear pieces before I screw up and buy one with money I don't have. What's on your personal grail wishlist? Share below:
1 like

I started my men's style blog in the beginning of 2013 to document and facilitate my own sartorial evolution. I've stuck with it and still love to dish out budget-friendly style advice and inspiration!

Dress It Down: Double-Breasted Blazer