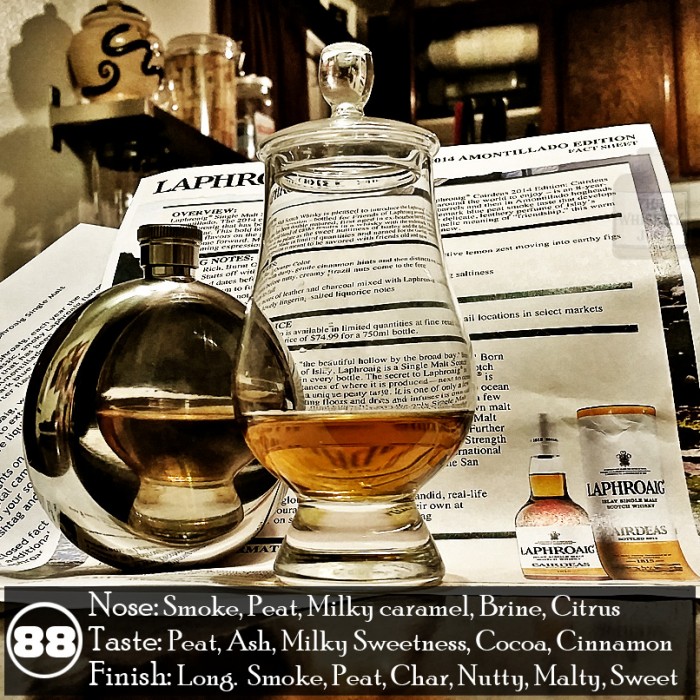 The 2013 Cairdeas was / is among my favorite whiskies. It’s so obscenely good I had a bit of separation anxiety when I finished off my first bottle and the only thing that could console me was knowing that I had 3 more bottles sitting in reserve so I opened one to set the world right again. Yes that’s a bit dramatic, but the truth is that it was amazing so how does the 2014 Cairdeas stack up? And more importantly… what the hell is Amontillado?

Tackling the last question first, because the first is answered in the review below, Amontillado is “a variety of Sherry wine characterized by being darker than Fino but lighter than Oloroso” (wikipedia). It’s a sherry that starts life as a Fino, but then through a manipulation of fortification is turned into an Amontillado. In simple terms it’s a type of sherry so what we’re really dealing with is a sherry finished Laphroaig. Just not the typical Oloroso or PX casks that are often sought after and used.

NOSE
There is no mistaking it… this is a Laphroaig. That sweet smoky peat just rockets out of the glass. Warm and aromatic that signature peat mixes gracefully with milky caramel, brine, citrus custard, smoked meat, cinnamon, toasted nuts and a rich earthy mushroom like character.

TASTE
Peat, ash and a milky sweetness permeate the palate. These dominant flavors mix harmoniously with notes of cocoa, cinnamon, leather, charcoal, smoked meat and sea salt. No matter how you slice it, it’s a nice tasting whisky.
FINISH
A long full finish filled with smoke, peat char and a nutty malty sweetness that slowly fades out to a leathery cinnamon.

BALANCE, BODY & FEEL
Great balance, a medium body and a warm rich feel that has some serious bite to it. You definitely know you’re drinking a high proofed scotch.

OVERALL
The nose and palate are nice, but there is a persistent milky sweetness in there that throws it a bit off for me. Don’t get me wrong, I definitely like it, but for me it just doesn’t hold a candle to last year’s release. The 2013 Port Wood edition is still among my favorite whiskies and has a deep and complex richness that this one just can’t quite match. Nonetheless, it’s tasty and as soon as I can find someone with a bottle in stock I’ll be bringing it home with me.

The Laphroaig 15: A Legendary, Limited-Edition...

Eventually replaced by the Laphroaig 18 year, the L15 has long been a favorite of whisky fans the world over and to celebrate their 200th anniversary it’s back in a limited 72,000 bottle run.