Ok, so Im a bit late with this post, but I had to report on this briefly. I'm sure you guys have seen the new Captain America and Kiehls collab, no? Well, Kiehls enlisted the first Avenger as the face of their new men's heavy lifting"Facial Fuel" cream. I think the collab is wonderful, and pretty damn smart. Captain America, if you didn't know is just about 75 years old, but has managed to retain his youth and stamina from being frozen in a block of ice in a state of suspended animation . So if there's any superhero that's wrinkle free, it's good ol' Steve Rogers. 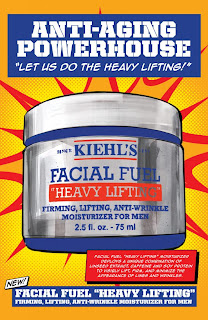 To celebrate this joint venture, Marvel has published a small comic for the brand (which is free with any Kiehls purchase). In it we see Captain America defending the Kiehl's flagship store against vilain, Cobra. I personally would've opted for a villain that's more recognizable than Cobra, but you can't have it all. I guess. 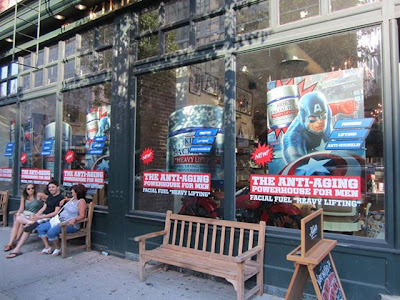 Interesting fun fact here is that the president of Kiehls (Chris Salgardo) is enamored with Marvel comics, particularly the X-Men and the Avengers. It was his idea to approach Marvel with the idea of a comic to support the cream. Kiehls and Marvel went through an entire roster of heroes and decided Cap was the perfect fit. The super soldier and the mega brand share a couple of things in common: one being that both are American made (Yes Captain America was made!), and secondly Steve Rogers is from Manhattan's Lower East Side, whereas Kiehls got its start in the neighboring East Village. And both have obviously have incredible longevity.

This looks like a promising fit for the two, and I'm excited to see the results. Make sure you guys check out the cream, well only if you need it!

I'm a stylish nerd that obsesses over geek culture and menswear with precision. twitter: @ralph_nerd facebook.com/TheRalphnerd

In the last ten years, the production duo of Christian Rich has been diligently creating a reputation among serious music...