Among the six new watches released by Richard Mille at... 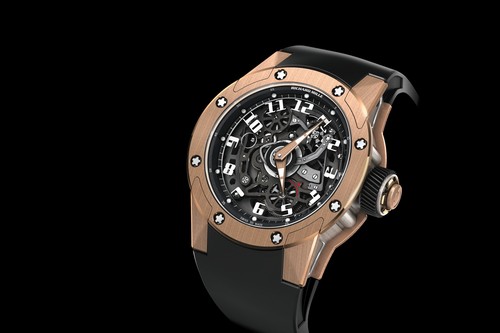 Among the six new watches released by Richard Mille at SIHH 2014, there was one that felt distinctly unlike the others – the new RM63-01 Dizzy Hands. We’ve come to know Richard Mille for the Swiss manufacture’s never-ending quest to push the technical boundaries of watchmaking (and the unarguably polarizing designs like the RM59-01 Tourbillon for Yohan Blake). Unlike other Mille timepieces, which are often inspired by high-level sports like F1 Racing and the aerospace industry, the Dizzy Hands takes conceptual cues from a poem called “Le Temps” by 19th century French poet Gérard de Nerval.

First, let's look at the unique in-house movement that animates this time-only piece, the brand new automatic calibre CRMA3. This movement features a 50-hour power reserve and a bevy of technical features, including a 20-degree pressure angle on the gear teeth that reduces discrepancies between axles along the going train. In addition, the watch’s barrel rotates at a rate of 5 hours per revolution, faster than the more typical 7.5-8 hours. This faster rotation reduces the potential for a phenomenon called periodic mainspring adhesion, which can affect timekeeping performance. The PVD-treated titanium movement utilizes mechanical principles from standard chronograph movements to actuate the rotation of both the hour hand and a special sapphire crystal disc within the dial. The hours of the watch are applied onto this disc, which is controlled by a column-wheel mechanism at 1 o’clock that is visible through the skeletonized dial.

When a pusher in the center of the crown is depressed, the disc rotates counter-clockwise, while the hour hand continues to move in a clockwise direction at a different speed. The result is a spirited suspension of conventional time-telling; a literal interpretation of the first line of the poem that inspired it all:

(“Time does not surprise the wise, but of Time the wise laughs,

In terms of styling, the Dizzy Hands is unabashedly Richard Mille, though there are a few design details that keep this piece slightly more subdued than other Mille models. The 42.7mm circular case is more conservative than the tonneau-shaped cases regularly used by the manufacture. It’s made of a mix of 18k red gold (for the front and back bezels) and titanium (for the central case).

Last year, Bell & Ross released 3 additions to their Aviation line, which built on the brand's "from the cockpit...