Hands-On With The F.P. Journe Ten Years Anniversary Tourbillon: A Platinum Tourbillon Limited To Just Ten Pieces, Whose Owners Are Selected At Random

As you likely know by now if you're anything of... 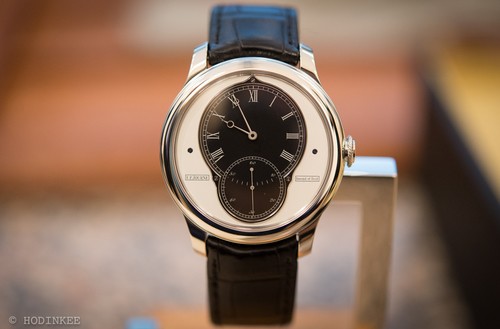 As you likely know by now if you're anything of a Journe (or HODINKEE) follower, FP Journe celebrated 30 years of watchmaking by producing a very special tourbillon that mimics his earliest work.  It's called the Historical Anniversary Tourbillon (or T30) and just 99 pieces will be made, at a price of $99,000.  It looks like this. Needless to say, the piece is on application and I actually know several people who've submitted their names who have zero expectation of being chosen to receive one.  Of course, by receive one, I mean pay $99,000 for one.  As an aside, you know you have a great business when people are writing letters to you pleading to ALLOW them to spend $99,000 on a watch, but that's another story.

99 watches isn't very many, certainly, but this rose gold watch with hunter caseback isn't the ultimate anniversary tourbillon – no, no.  In fact, just this past week in Geneva I had the chance to view something even more special, even more rare, even more impressive.  I'm talking about the 10 Years Anniversary Tourbillon, or T10 Tourbillon. Ok, so what is the T10?  Well, it's a limited edition anniversary tourbillon, but instead of machined rose gold, it's made of smooth platinum. Instead of a pure silver dial, here you have contrasting grained silver with black hours and seconds, all held in place by a polished steel ring.  And instead of a gilt brass movement hidden behind a hunter caseback, you have a solid rose gold movement viewable through a sapphire caseback.  It's called the T10 because it is made in honor of not only the tenth anniversary of Journe's first boutique (located in Tokyo) but also in celebration of the opening of its tenth factory owned boutique, in Beirut. So, if there are people lining up to pay $99,000 for the LE of 99 T30, imagine what you have to go through to get one of the T10's.  Actually, you don't even really have a say in the matter.  Mr. Journe asked each of his ten boutiques to nominate three of their most loyal, passionate collectors to be entered into a drawing.  Then, this past wednesday night, at the FP Journe Manufacture in Geneva, a drawing was held completely at random.  And now that has been done, there are ten very lucky owners of these incredible Journe tourbillons.  Take a nice long look at these photos, because unless you are friendly with a very, very good customer of FP Journe, who also happens to have a bit of luck, odds are you'll never see one of these again.