Let's get one thing straight. I'm not a tourbillon guy... 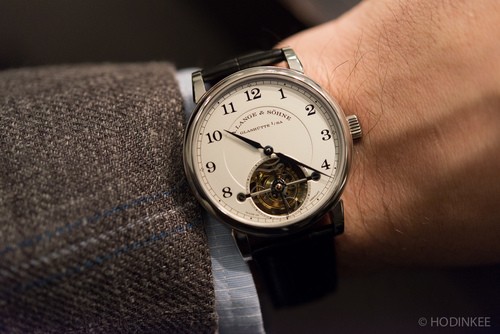 Let's get one thing straight. I'm not a tourbillon guy at all. In fact, I think most of them are downright ridiculous. There are, of course, a few exceptions, where I believe the technical thoughtfulness, artistic integrity, and the simple beauty of them in motion outweigh my general belief that this complication is more than useless (then again, aren't all mechanical watches?). Some that I give a pass to include those from Laurent Ferrier and FP Journe, the Tradition tourbillon from Breguet, the 14-day guys from VC, the Gyro from JLC, the downright ridiculousness of the mega RM's, and the occasional ultra-slim Royal Oak tourbillon. But, if it came down to it, and I were forced to spend my own (pretend) money on a tourbillon wristwatch, it would likely (though not definitely) be from A. Lange & Söhne. Now I'm not going to lie and tell you that if given my druthers, the Lange tourbillon I'd buy would be this new 1815 (first shown to you in January during the SIHH) – because it'd surely be the original Pour le Mérite seen above, or even better, a rare white-metal version like this, or this. But, these early PLM's are getting increasingly difficult to find and even more impossible to afford. This new 1815 has a lot to offer, including a look that is very reminiscent of the first Lange tourbillon, so it is certainly more than appealing to me. Let's get into it.

The 1815 Tourbillon With Stop-Seconds Mechanism And Zero Reset This is the new A. Lange & Söhne 1815 Tourbillon. The tourbillon is totally visible, and the case is pretty beefy – two things I generally dislike about a complicated watch, but I don't dislike them here. The reason is this new tourbillon, which pays obvious homage to the first Lange tourbillon pictured above, complete with giant tourbillon cage at 6 o'clock and massive horizonal bridge, set on a simple silver dial with printed numerals. It is incredibly simple looking, with a super slick technical side that many would never take the time to pay attention to, all with the focus of precision time keeping.

You see, this tourbillon features two patented systems that allow for the easiest and most precise time-setting one could ask for. The one-minute tourbillon, clearly visible at 6 o'clock, is automatically stopped when one pulls out the crown (consider this a "hacking" mechanism for all you vintage folks out there). There is a blue-steeled hand indicating subsidiary seconds, clearly connected to the tourbillon. There is a small "claw" that resides within the tourbillon, and this is where things get interesting. If you look at the tourbillon aperture as if it were a clock, the claw protrudes from around 10:45, and hovers at the top of the hole in the dial. When one pulls the crown, the claw comes down and stops the tourbillon from rotating. In this watch, you can actually visualize the stop-seconds mechanism. In the image above, the tourbillon is running (crown in), in the image below, the tourbillon / seconds has been stopped (crown out). See how the claw has come down to make it stop? Here is a better image of the tourbillon, courtesy of Lange: But, not only does the tourbillon (running seconds) stop, but a fraction of a second later, that blue steel hand will also jump right back up to 12 o'clock, or zero. That means one can set this tourbillon with the utmost precision. Oh, and it looks really cool, too. So, for example, if you're setting your tourbillon against a time-signal or, you know, your iPhone, you can be absolutely precise to the minute, and second, and to me, that is what elevates this tourbillon above many others. Still not sure how it works? Watch this little video of it in action:

Then you have the overall look. This new 1815 is a perfect 39.5mm in diameter. It's a little thicker than I'd like at 11 mm, but the depth is due to the dimensionality of the tourbillon and traditional untreated German silver movement. Again, it is no accident that this new 1815 looks a lot like the 1994 PLM tourbillon, and I have to say, I absolutely love it. What's interesting to note is that the tourbillon on this 1815 is actually almost 1 mm larger than any previous Lange tourbillon at 13.2 mm – one must remember how shocking it was to see the giant tourbillon cage of the PLM back in 1994. The finishing on Lange's new caliber L102.1 is, unsurprisingily, nothing short of superb, and the tourbillon bridge is marked with a small diamond (which I could live without, but not worth deducting points). On the wrist, the 1815 is fantastic, and though the tourbillon here is front and center, with A. Lange & Söhne there is always much more than meets the eye, which is part of the reason why I like this watch so much. You may find out more about this watch right here. Oh, and if you want to watch Lange technical director Tony de Haas explain the watch in even more detail, view below:

The Longines HydroConquest line is dedicated to men and women looking for a high performance timepiece that combines technical innovation...