Hall of Frame - a visit with Garrett Leight California OpticalMy...

Hall of Frame - a visit with Garrett Leight California Optical... 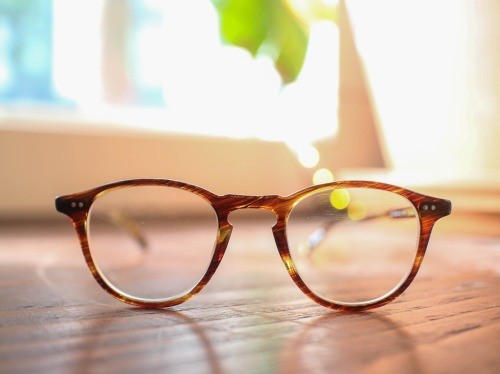 Hall of Frame - a visit with Garrett Leight California Optical

My bad eyes have made me highly dependent on corrective lenses, and for that reason there has always been a place in my heart for attractive frames. My favorite is the P3 shape - a classic round lens style that features a keyhole bridge. I stumbled upon Garret Leight a couple of years ago when doing some research into P3 frames on the market, and quickly became enamored with pictures of their handsome glasses. Of course, as any true iGent knows, a collection of jpegs is a poor substitute for experience with the real thing; for that reason, I’ve been keeping an eye out (pun intended) for an opportunity to check out GLCO’s frames in person. Fortunately, San Francisco’s own Welcome Stranger hosted a small GLCO trunk show over the weekend so I made sure to stop by.

This trunk show was run by Mr. Garrett Leight himself, which gave me an opportunity to learn quite a bit about the brand and the story behind it. I was surprised to learn that the company is quite young (less than 4 years), but I was most interested to hear that Garrett’s father is none other than Larry Leight, co-founder of the eyewear giant Oliver Peoples. Oliver Peoples was created in 1986 and quickly rose to prominence with its vintage-inspired frames and Hollywood endorsements; like so many other eyewear brands, though, they were ultimately purchased by Oakley, who in turn was purchased by the eyewear giant Luxottica. I can’t speak to whether the quality of OP changed after the company’s shift, but I do find it unnerving how vast Luxottica’s reach is and I try to avoid purchasing their products (although it is difficult, seeing as they own basically everything). Garrett was able to have an insider’s view of the whole Oliver Peoples timeline, and I imagine that it gave him many ideas on how he would (and would not) want his own company to operate. His position within the eyewear industry undoubtedly gave him the resources he needed to start a company like GLCO, and now that his company is well-established it provides one of the best alternatives to the Luxottica brands. The style of Garrett’s frames is not dissimilar to his father’s; both seem to merge the nostalgia of vintage styles with casual and colorful vibes of Southern California. That said, I think Garrett’s frames are a bit more appealing to me (and they’re certainly cheaper). GLCO frames are carved out of acetate that is sourced from Italy, Japan, and China (the alternative to carving acetate is injection molding, which is much worse). The frames are then assembled and hand-polished in China before being shipped out to stores across the world. The acetate that Garrett sources is probably the most stunning I have ever seen - each pair has incredible depth of color and character that sets it apart from other eyewear brands I’ve tried. The designs themselves are very attractive as well. The frames are much more slender than the chunky acetate ones we often see, and the lines of each frame are smooth and sleek. For example, compare GLCO’s Hampton to Warby Parker’s Downing - I like Warby Parker, but when it comes to design there’s just no competition. Garrett Leight has a full collection of men’s and women’s eyeglasses and sunglasses, but their core collection of unisex frames is what entices me the most. As I hinted at above, their Hampton model is far and away my favorite. It comes in a wide set of color and width choices, and can even be accompanied by these cool clip-on acetate sunglasses. I have a feeling that the Hampton will be my next pair of frames, although I can already tell that choosing a color will be difficult. I love the Chestnut color shown in the first image, but the blonde color below just seems right for my face. And there’s always their classic tortoiseshell, too, which can’t be overlooked. It’ll take some thinking before I can make that decision but I can confidently say that I’ve found my new favorite eyewear brand.

Thanks to Garrett for making the trip up to San Francisco, and thanks to Welcome Stranger for hosting. Welcome Stranger holds some of GLCO’s sunwear collection in stock so be sure to check it out if you’re curious. Item Roundup: P3 Glasses Every now and again someone has the gumption to tell me that I’m lucky to have...