From season to season the only real consistency one can...

From season to season the only real consistency one can expect in the Dsquared2 collections is the drama, theatrics and impeccable styling that you know will be forthcoming from the brothers Caten. For Fall ’13 Dsquared brought us back to the post-war 40′s jazz era with La Nouvelle Noir. It simply wouldn’t be a Dsquared2 collection without their signature use of ruffed up denim, turned out this time cut wide, a bit slouchy, and dressed up to some very hip nines. The Caten brothers have an affinity for a certain sartorial fun that lays just barely on the safe side of costume while remaining incredibly believable and wearable. I often wonder if the brothers are missing another calling in the film business…

Pieces that I particularly loved included the beautifully saturated red coat that opened the show, blackwatch tartan blazer, and gorgeous leather bucket totes. And the flannel windowpane DB suit was to die for. Missing from the show were the animal prints that were so on trend across menswear shows this season, and a print that you’d expect Dsquared to flash a bit of. However, in lieu of animal print Dean and Dan gave us beautiful astrakhan. And after all was said and done that inclusion may have been the best surprise in the show.

For more Dsquared2 coverage on MD.

[Pics via Style, Video via Dsquared2] 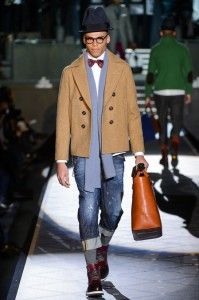 There are some brands that make me say "If I was a man, I would definitely wear this!" and there...