I'm Starting to Dress Like My Dad—And That's Okay

It’s not that you don’t like him or his wardrobe, there’s just this line in the sand, clearly defining generations, over which everybody knows not to cross. Awkward teens shouldn’t expect to don loose light stonewashed denim and a short sleeve button down and get away with it, and under absolutely no circumstances should a father ever even think about wearing a drug rug.

Throughout high school I knew these rules and stuck to them, favoring t-shirts, athletic clothing, and the occasional flannel until I adopted my preferred quasi-uniform of jeans and a gray t-shirt halfway through college. I don’t really know why it happened—this was before normcore—but in the visual noise of that fashion crossroads, everything seemed to cancel out.

The equilibrium didn’t last long. Walking out of a class one day I saw a guy wearing a plaid, short-sleeve button-up. The shirt—significantly unbuttoned—exuded the rugged and insouciant attitude of a 70s National Geographic photographer stepping off a DC-10 after an Odyssey somewhere dangerous, which I strangely identified with. It wasn’t in ideal condition, but instead of looking shabby, the shirt seemed to shrug and say, “You should see the other guy.” It looked like Harrison Ford would look, if Harrison Ford were a shirt. 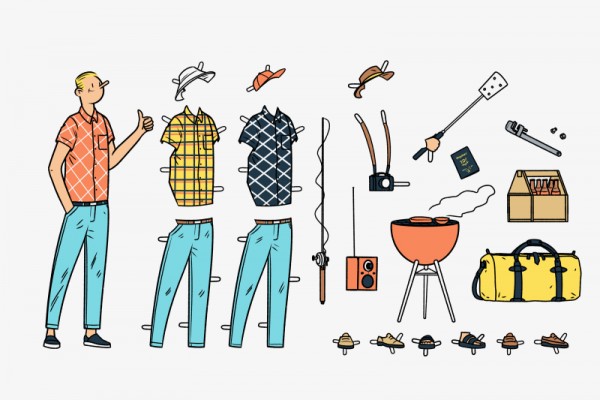 Later that year I was home for break and noticed my father was wearing what appeared to be a variation of that shirt. The next day a different one appeared; the day after, yet another one. I looked in his closet and saw he had quite the surplus. How had I not noticed this before? They were all the same, and they were the kinds of shirts that you’d associate with a '50s lab scientist on his leisure time, or a geologist at any time in any decade.

It wasn’t like retro hadn’t appealed before; rock ‘n roll fashion had made its fringe appearances in high school and been significantly amplified upon matriculation. But it was always from a niche identified and acknowledged as cool, not something reissued from an older mainstream and certainly not of the presiding generation.

I asked my dad if he had any rejects from his collection, and with amused surprise he bequeathed unto me one that he considered “too ratty to wear to work.” This of course was preferable, and I immediately introduced it into my rotation without blinking.

Over the next six months, my wardrobe slowly morphed from its generic stasis into “mid-century 30-year old dad,” as I collected not only short-sleeve button-ups, but also matching Levi’s 501s that threw it back even more. It was only when someone mentioned the paternal quality of my clothes that it occurred to me I’d done more than borrow a shirt. I’d adopted an entire look.

I’m not sure exactly why I embrace this inherited style. Perhaps it has something to do with adulthood. With finally attaining independence and donning its de rigeur uniform. More likely, though, I suspect that I wear my dad’s shirts because I want to earn the right to wear them. They’re the shirts of men of a different time. Men of action. They’re the shirts of my father.

Just look at them. The collars give off a hint of formality. They’re not plain, and the patterns would allow dirt, sweat, grease, or blood to go unnoticed for days on end. I can only assume the short sleeves are a reaction to getting sick of constantly rolling up sleeves to build something with power tools or fix a broken transmission. These are clearly the shirts of Hemingways, mechanics, foreign correspondents, woodworkers, and individual who prefers traveling by car over plane, no matter the distance. To me, my father’s shirts are an object of aspiration, and go best with hardened calluses, full passports, and bulging forearms. Maybe I’ll grow into them someday.

First Of Fashion Flick Trilogy Released Ben Sherman has brought its Button Up campaign to the small screen by releasing...