The Whiskey Jug reviews Cutler’s 33 Straight Bourbon Whiskey, with spices and flavors reminiscent of freshly baked pies in the fall. 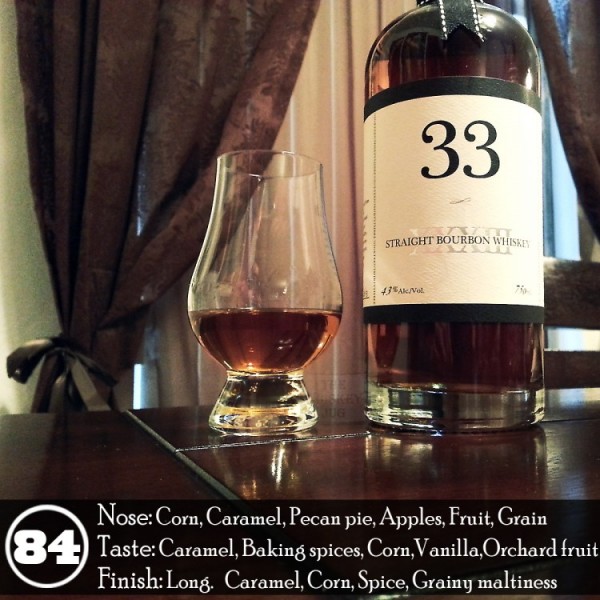 Cutler’s 33 Straight Bourbon Whiskey comes to us by way of Cutler Artisan Spirits in Santa Barbara, CA but they do not distill it. However, unlike many NDPs in the bourbon world, they openly state it on the left side of the bottle: “Blended in small batches from a limited number of hand selected barrels. Sourced from a quiet barrel house in the heart of America’s back country, 33 Bourbon Whiskey is carefully blended and bottled by hand at Cutler’s Artisan Distillery.” Honesty… how refreshing.

True we don’t know exactly where it comes from, but the part about “America’s back country” got my brain working. When I first tried this I thought of Roughstock and Montana would definitely be considered back country. But then so are parts of Indiana where MGP, who only distills for other people, is located. But then so is Kentucky and there are aspects of this that make me think of Woodford Reserve. It’s a mystery for sure, but at least it’s a properly declared mysetry.

NOSE
Corn, caramel, pecan pie and apples followed by some light fruit, an odd amount of grainy maltiness that reminds me of the Roughstock Montana Pure Malt. Add a bit of spice and you have yourself a nice smelling whiskey.

PALATE
Caramel, baking spices, corn, vanilla and a light orchard fruit make it taste kind of like a fruit pie with a corn crust. There is a warm dark sweetness running through it and that same Roughstock-like maltiness from the nose is back, adding a unique and delightful dimension to it.

FINISH
Caramel, corn, spice and some more of that grainy maltiness make for a nice slow fade that’s completely enjoyable.

BALANCE, BODY & FEEL
Smooth and easy with a nice balance and medium body.

OVERALL
Cutler’s 33 Straight Bourbon Whiskey is not quite as rich and complex as other bourbons that can be found in the 4-8 year range, but it’s pleasant to sniff and sip and that definitely counts for something. I do wish we knew exactly where it was being sourced from, but at least they aren’t claiming to have distilled it and it isn’t priced at something truly ridiculous like $60. It’s a decent bourbon and the strangely high malt-like quality gives it a little something different. Which is a long way to say that it’s definitely not a bad bourbon, but there are bourbons out there I like more for about the same price.