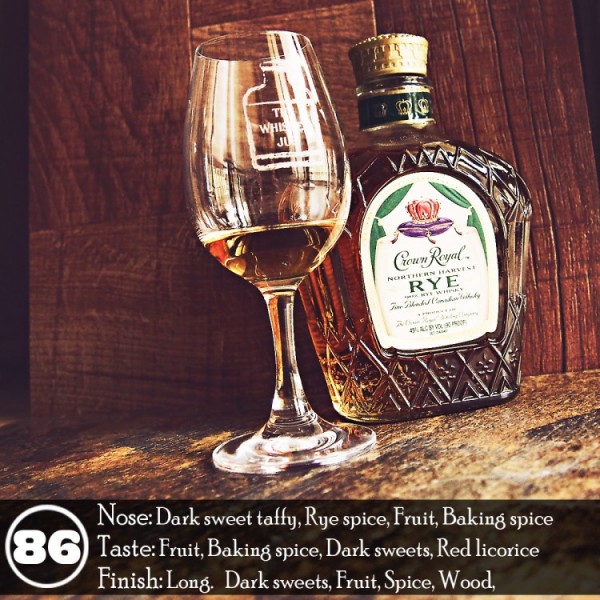 Crown Royal Northern Harvest Rye is the first true rye whisky put out buy Crown Royal, a Canadian whisky company that’s been around for over 75 years, and they didn’t cut it short. This rye comes in with a whopping 90% rye whiskey and the other 10% is… a mystery. Crown Royal hasn’t said so it could be some kind of grain whisky, corn whisky, malt whisky or a mix of it all. The only thing we know for sure is that 90% of what’s in this bottle is good ‘ole Canadian rye whisky.

Their purple labeled and bagged workhorse whisky does have some rye in it, but it’s not a large amount, more like the amount found in a standard bourbon here in America. Speaking of America, I can’t help but feel like the rising popularity of Canadian Rye whisky like Masterson’s rye, Whistle Pig and Lot 40 have had at least some bearing on the creation of this product. Either way, it’s a timely release from our northern neighbor.

NOSE
Dark sweet taffy, sharp rye spice, fruit and baking spices come up first, laying a solid foundation for some lighter notes of lemon peel, sandalwood and dill to play on. It feels a bit reserved and for being 90% rye I was expecting a bit more of a kick.

PALATE
Fruit, baking spices, dark sweets, red licorice and a touch of vanilla and citrus move through in an an un-orded jumble followed by a light touch of woodiness that kicks up towards the end.

FINISH
Long and filled with dark sweets, fruit, spice and a hint of wood that builds as it fades.

OVERALL
Admittedly I’m not the biggest fan of most Canadian whisky, but the Crown Royal Northern Harvest Rye is actually not too bad. Pretty good one might even say. It is a little light on the nose and palate so it ends up coming through a bit subdued, but what’s there is pleasant. When it comes to the rye content in this whisky the closest thing I can equate it to are the MGP 95% rye whiskies like Bulleit Rye, George Dickel Rye, Willett Rye and Rebel Yell Small Batch Rye who all have a much bolder spicier character than this which could be due to all kinds of factors like the strain of rye used, distillation methods, colder aging climates or grain whiskey is tempering it. Either way it’s not a bad Canadian rye whisky at all and definitely worth a try.

*Disclosure: This bottle of Crown Royal Northern Harvest Rye was graciously sent to me by the company for the purposes of this review. The views, opinions, and tasting notes are 100% my own.