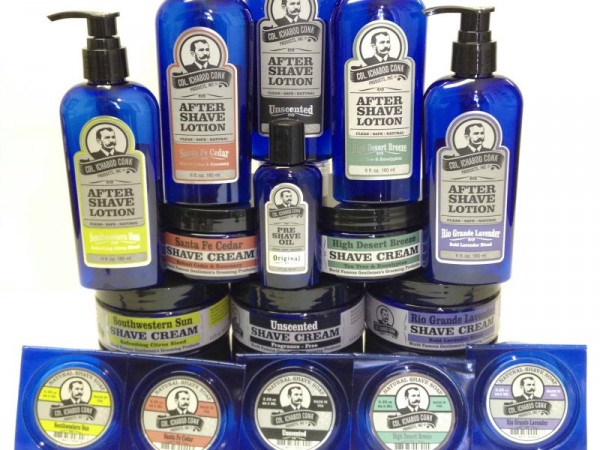 Colonel Conk is known as a “value” brand, offering inexpensive wet shaving products. Now the Colonel gets a “promotion” with a new line of upgraded shaving products with a Southwestern United States theme. Full disclosure: I was one of a number of testers Col Conk solicited opinions from when they were developing their new product line. I’ve been testing and using these products for several months.

Santa Fe Cedar--Cedar and Rosemary. I get a pretty good balance of the two scents and I think they pair pretty well together. The Rosemary is slightly more pronounced to my nose but not in a bad way.

High Desert Breeze– Tea Tree and Eucalyptus. I’m a sucker for Tea Tree so I’ve been using this scent the most. It is pretty strongly-scented, with the Eucalyptus providing an interesting counter-point.

Rio Grande Lavender– Col. Conk calls this a “Bold” Lavender and I agree: this is not your mama’s lavender scent. Rather than being content as a “subtle” scent, this one shouts it to the rafters. The lavender scent itself is pure and mellow (not as “sharp” as some other lavender-scented products).

Southwestern Sun— Citrus blend. I get mostly lemon in this scent. It’s much more of a “tart” note (vs. a “sweet” note). If you have tried The Art Of Shaving lemon shave soap you will find similarities in scent here.

There is also a pre-shave oil that comes in a single, “natural” scent.

Of course, great scents mean nothing if the products do not perform. Here is my take on the individual elements:

The shaving soap is a fairly typical glycerin-based product, but definitely a step up from the original Col. Conk line in terms of performance. I was able to make a fine, luxurious lather in no time, even in my hard water. On it’s own the shave soap performs quite acceptably, and it improves perceptively when paired with the pre-shave oil.

I should mention that my initial trial of the soaps were a little inconsistent: some pucks performed better than others. That turned out to be a glitch in the blending process and later samples performed pretty much equally.

The shaving cream has a “creamier” and “softer” consistency than most other shaving creams. I find it needs less water than other creams too. It took a few test lathers for me to find the “sweet spot” (tip: use a dryer brush than usual) but once I found it I was rewarded with tons of rich, fragrant lather! Cushion is excellent and lubrication is very good, with the pre-shave oil improving lubrication more.

One quirk of the creamier, softer texture may be an odd-looking distribution of cream inside the jar. A couple samples had a big air bubble that made it look like the jar was almost empty when I first opened it! A quick stir with a spoon took care of it though, so don’t be too concerned if you see it. Conk tells me they’re working on how to prevent the uneven distribution that apparently occurs during shipping.

The aftershave balm might be the best value of this new line, as it comes in a big pump bottle! The performance is solid, with good protection and a nice matte’ finish. You don’t need much balm at all to get the job done.

Admittedly pre-shave oils are just not my cup of tea. But using it did kick up the performance of the shave soap and shave cream somewhat.

The new line is not yet widely available. One place I know that does have it is AmazingShaving.com . I’ve seen individual products on Amazon (like the Shaving Cream or the Shaving Soap) but not the whole line yet.

I’ve been involved with the evolution of this line so I’ve had an opportunity to see (and appreciate) the hard work that goes into formulating shaving products. Col. Conk has walked the tightrope and has come up with a solidly-performing line of wet shaving products at a good price point.

The post Colonel Conk Gets A Promotion appeared first on Sharpologist.

"What your father didn't teach you about shaving." I started sharpologist.com in 2011 as an additional resource to my 'how to shave' videos on youtube and other sites.

By mantic59 Ever since I started making shaving videos, people have asked me what my favorite shaving products are.  I’ve...