Photographer Paul Westlake on Surfing the Superwaves of Teahupo’o

Teahupo'o might be famous—but with waves up to 21 feet, it's not for the faint of heart.

“Imagine, if you will, a wave that has a 20 foot face, is thick and as heavy as a building, breaking into a razor sharp reef that is just a couple of feet deep." - Paul Westlake

No one paints the picture of Teahupo’o’s superwaves better than lifestyle photographer Paul Westlake, a snapper who regularly travels to far-off lands capturing unreal adventures. Truth be told, these savage adventures are only unreal to most of us, for some, such as Westlake, these adventures are just another Tuesday. However, your Tuesday (the less eventful kind) is about to take an unexpected turn as Westlake talks us through his journey to Teahupo’o. Now get up and go see these manhandling waves for yourself - we dare you.

Welcome to Teahupo’o, otherwise known as “a place of skulls.”

The island has seen an explosion of popularity in the last 15 years as it has transformed into a hot surfing destination. Every August since 1999, the Billabong Pro Teahupoo is held in the village. Huge names in surfing, from Kelly Slater to Mick Fanning ride the waves yearly. Yet, there is a reason only the best of the best are advised to ride here: the waves typically reach heights of seven to 10 feet, and occasionally as high as 21 feet. For you Game of Thrones fanatics, that’s three Hodors stacked on one another, for scientific comparisons (obviously).

Thus, Teahupo’o waves are routinely ranked among the 10 most dangerous in the world, a nomadic place where five lives have been claimed since 2000. Anyone in less than peak, physical condition will fail. Even the best are conquered at times. 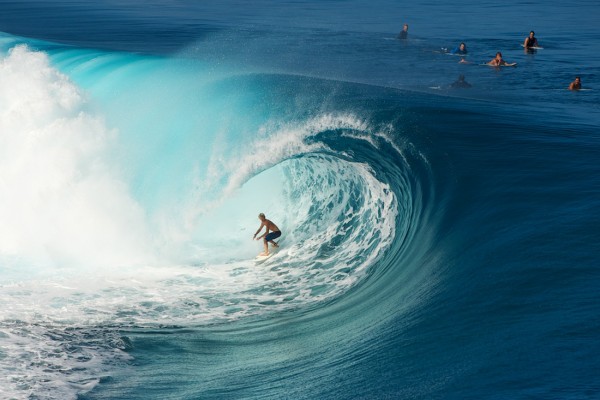 “I watched Kelly Slater wipe out and break a rib,” Westlake said. “So, not for the faint of heart.” Westlake explained. “Once you are out there the power of the wave is staggering.”

KNSTRCT [kon-struhkt] is a curated, online gallery of design news that launched in 2010. We publish select, cutting-edge, and highly researched stories in the areas of art, design & travel.

Everything You Need to Know About Pro Surfer Kelly...

Arguably the world’s most dominant surfer, Kelly Slater, has spent the bulk of his adult life on the road. From...