10 Street Style Trends We Saw at the Spring 2016 Shows

At the spring 2016 shows, the street style looks were just as cool as those that came down the runway. Here, 10 trends to keep an eye on.

This is always my favourite time of the year on the menswear calendar, with London Collections Men, Paris & Milan Fashion Week, and Pitti Uomo all happening within a two week time span. This is the time of year where menswear really gets the spotlight in the fashion world. Even though I’m not in attendance for any of these shows, the street style pictures are always something to look forward to. Some of fashion’s best photographers such as Tommy Ton & Scott Schumann do a excellent job of capturing the personal style of menswear elite, who are attending these shows. I personally found the street style photos that make their way out of the internet to be more relatable, and inspiring rather than the shows itself sometimes. Here are a breakdown of some of my favorite street style photos from the shows. 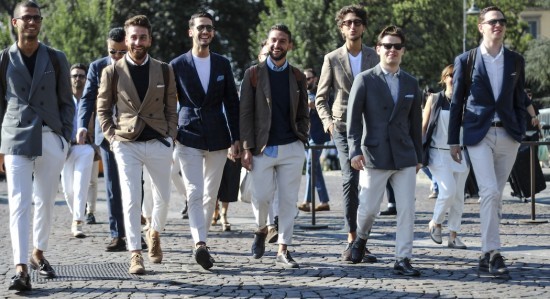 As much as menswear has expanded to include such a wide variety of silhouettes, the foundation and the heart of menswear still resides in the classic suit jacket. This squad of well dressed friends that was captured in Pitti Uomo perfectly exemplifies the versatility of a suit jackets. Each friend is wearing something distinctly different underneath their double or single breasted suit jacket. Whether it’s a crew neck, V-neck, dress shirt, dress shirt, or a sweater underneath a dress shirt, it all works. 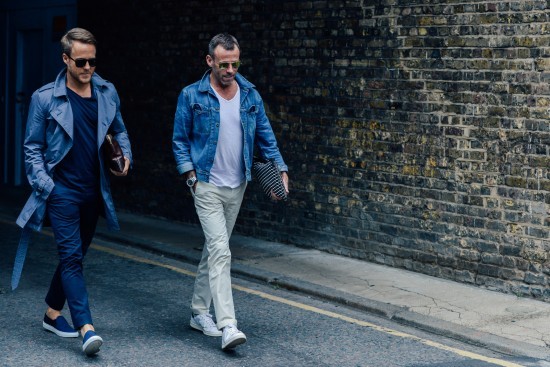 You might not be able to tell when you just focus solely on menswear shows, but there has been a movement in minimalism when it comes to how men dress. Flashy and big logos was a trend two years ago that have seemed to quiet down; Now you have men dressing you a sense of scandinavian flare with understated simple pieces. This street style picture of two men during London Collections Men perfectly showcases the minimalist movement with one dressed in tonal navy, and the other in a simple jean jacket underneath a white t-shirt. 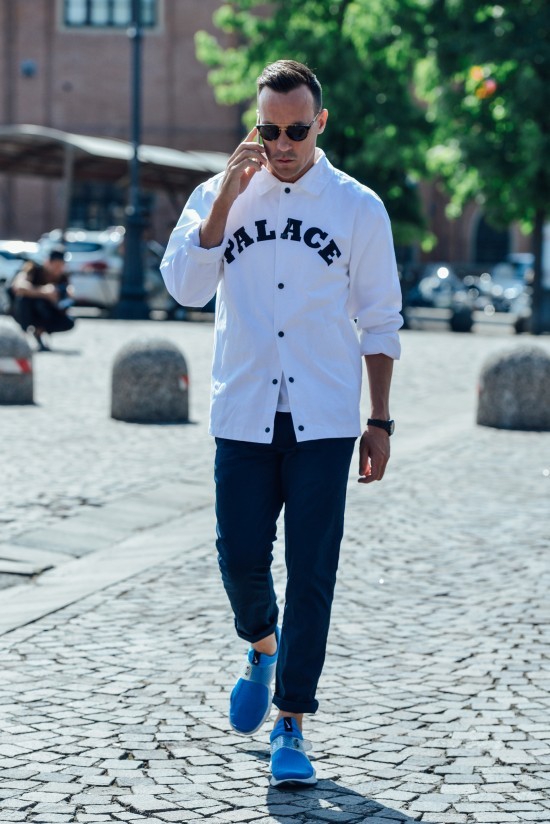 When it comes to menswear, sometimes sticking to the tried and true is the way to go. Classic colour combos such as white & navy during the summertime is a can’t lose combination to stick with during this time of year.

Making the Clothes Your Own 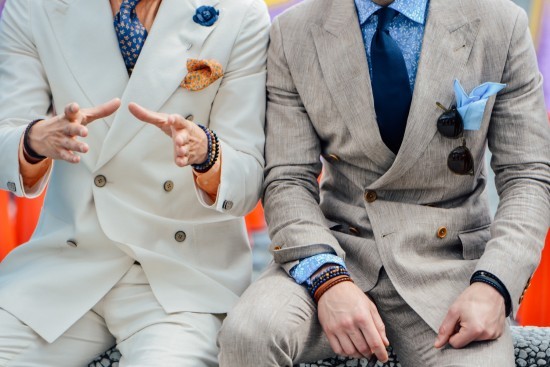 One thing that always stands out during Pitti is how men try and peacock (men who dress to stand out from everyone else) while still dressing in a traditional suit and jacket. Whether it’s a stack of bracelets or multiple accessories, men at Pitti want to standout from the crowd, and make their clothes their own by really personalizing them with small accessories and details. 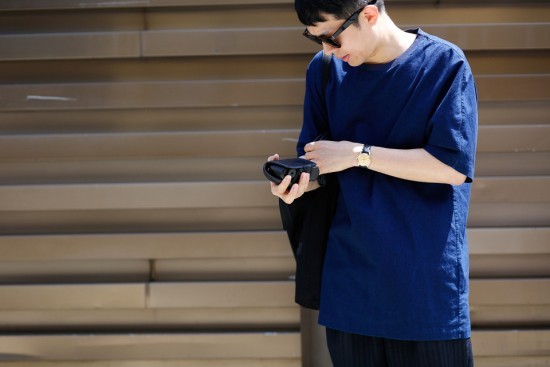 Remember the days of the late 90’s and early 2000’s where clothing was a lot more relaxed. Well, those days of wearing something that has more of a relaxed fit is coming back. No, were not talking about triple extra large tees, but the idea of wearing everything skin tight and extra slim has hit it’s critical mass in menswear. We now have designers who are opening things up and embracing a more relaxed, baggy, airy, silhouette. 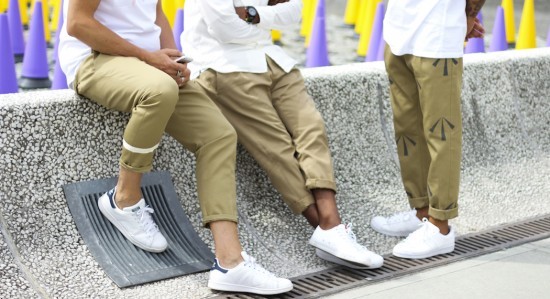 There seems to be no stopping the popularity of sneakers within the menswear community, as they seem to be the footwear of choice for almost all men, no matter what their wearing. Looking through all the street style pictures from a wide variety of publications, there is no shortage of street styled pictures of sneakers from a wide variety of angles. Dressed up or down, the past weeks of street style photos have shown us some of the most stylish men still fancy their sneakers. 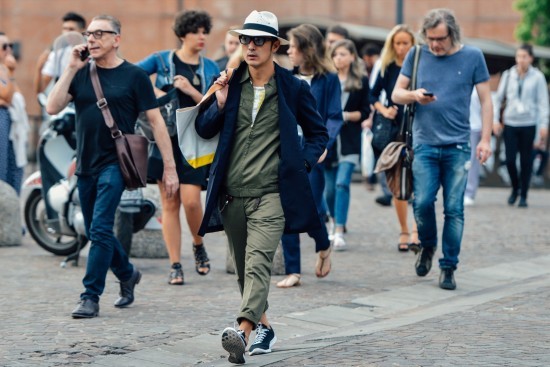 It’s been a trend within menswear the past two-three seasons, but hats such as fedoras, panama hats, bowler hats, have been popping up on the top of many men’s heads, and it was no different in this years street style photos. 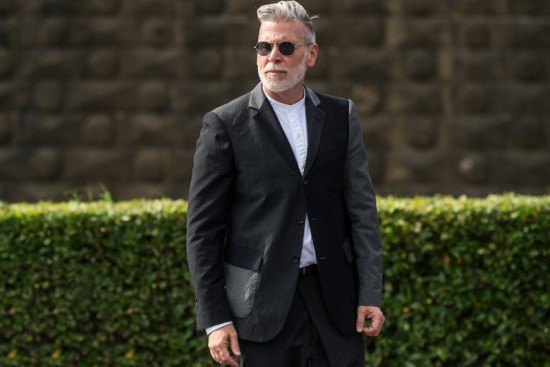 Band collars, the collarless dress shirt have officially become a staple in menswear. Whether worn on their own, or paired with a jacket, some of the most stylish men on the internet such as Nick Wooster have been snapped up in the versatile shirt during Pitti. 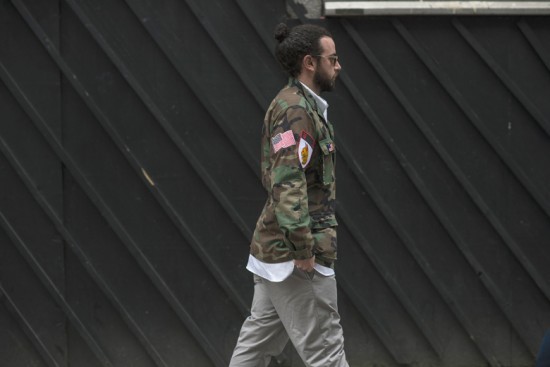 Three years ago, menswear could not get enough of camouflage. The print became oversaturated; everything from phone cases to wallets were laced with the military inspired print. The camo craze has definitely died down, but judging from the street style pictures, some men are bringing it back to it’s roots by wearing authentic BDU shirts with custom patches. 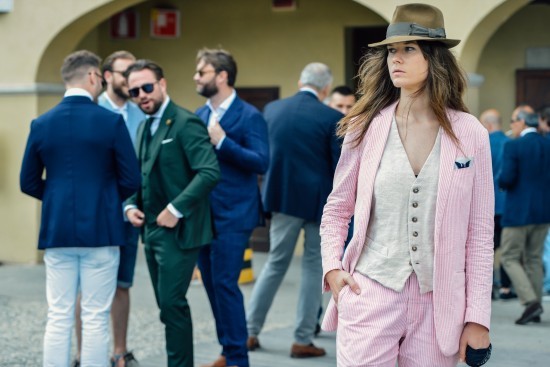 It’s not just all men who are attending the menswear shows, there are also women who are in attendance, who are schooling men on how to wear some of our own pieces. Women like Ashley Owen of Grandpa Style and Suited Magazine,have been photographed numerous times the past two weeks during the run of men’s shows.

The post Breaking Down Street Style Photos Via Spring/Summer 2016 Show’s appeared first on Speaking Of Style.

One of the reasons why I started Speaking of Style was to show individuals, that having style, can be done...