A NEW YORK JOURNEY: PLACES TO GO, SEE AND EAT

18 shows and presentations (not including ones we unfortunately had...

18 shows and presentations (not including ones we unfortunately had to decline). 10 days. 2 hotels and 2 Airbnbs. 1 heck of an adventure.

As mentioned before in the preceding posts, this season of New York Fashion Week is a record breaker for us. It made our previous seasons seemed a little bit like child's play. We were trotting up and down Manhattan, from the Lincoln Center to Milk Studios, photographing from backstage and the front row. There was no shortage of activity as we conquered the euphoria and tribulations of fashion season in New York.

While there were many, many great moments, the tough times made our experience that much more challenging, rewarding and life-changing: Dealing with undesirable seats (you literally cannot even get a decent photograph when placed on the second or third row) made us quick to adapt to shooting in different angles. Keeping your composure when your phone decides to spontaneously combust and reviving itself (miraculously) a few hours later. Scheduling and sending enthusiastic friends as correspondents to conflicting shows. And then - managing to sit down for a proper, nourishing meal and getting some restful sleep. However, the moments in between all the hard work, sweat and blisters, and that chicken over rice three times in the course of two nights, was all worth it.

Instead of continuing our tradition of doing a NYFW-recap, we've decided to share with you our tiny slice of the New York experience. Keep in mind that this is not intended to be comprehensive but rather a more intimate view of some of the city's most overrated and underrated destinations, sites and good eats. 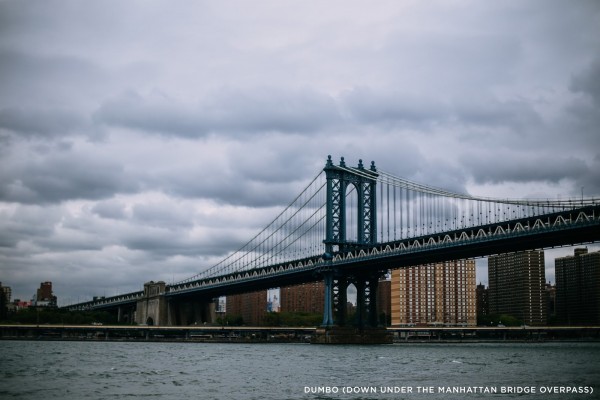 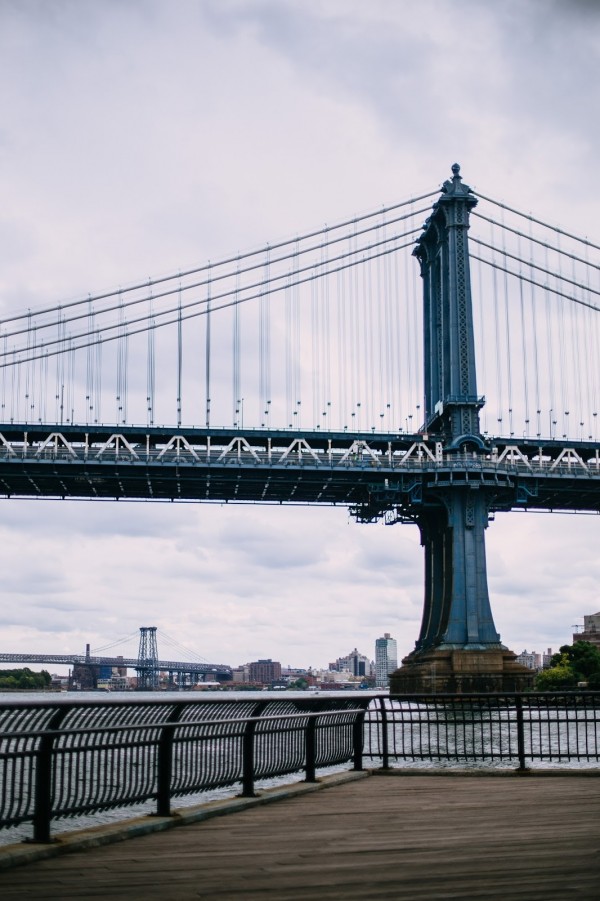 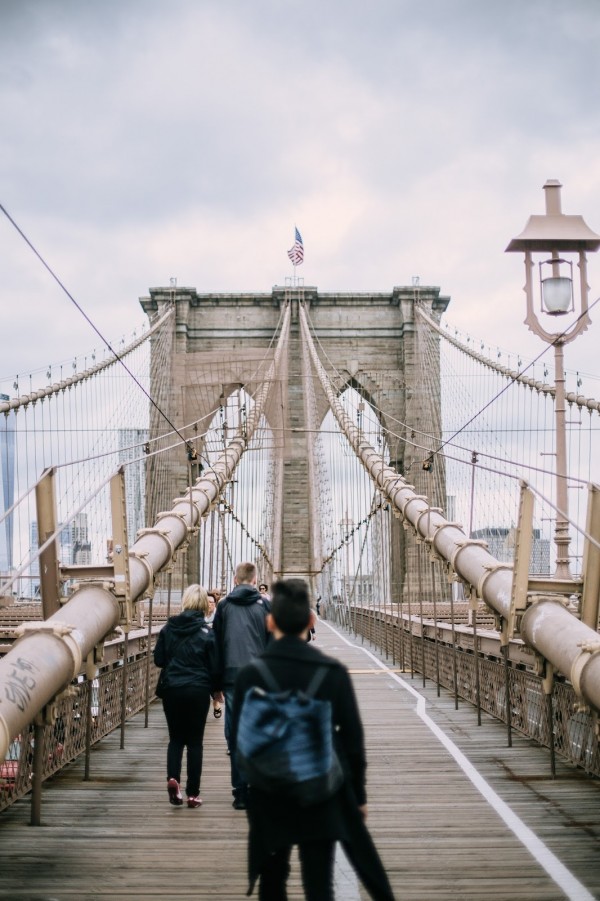 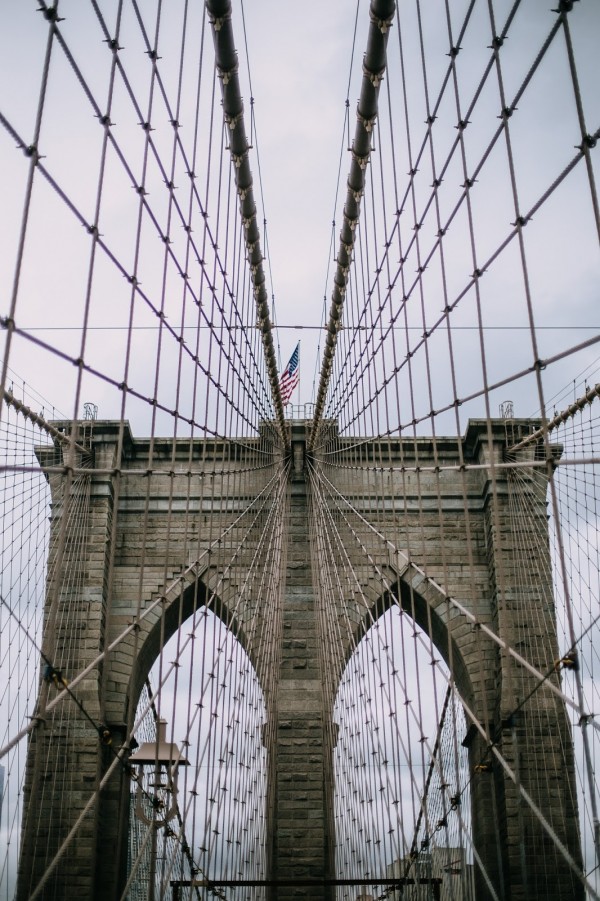 As referenced to in an outfit post, we woke up inhumanely early to soak up the breathtaking views at DUMBO and on top of the Brooklyn Bridge. We mildly succeeded but were so happy we made the trek across the entire bridge. Our biggest regret and recommendation was not snacking a little bit beforehand - alternating between moods of rapture and hunger (more so hangry = hungry + angry, in my case) slightly dampened the whole experience. But do it anyway - it's touristy but much cooler than Times Square will ever be! 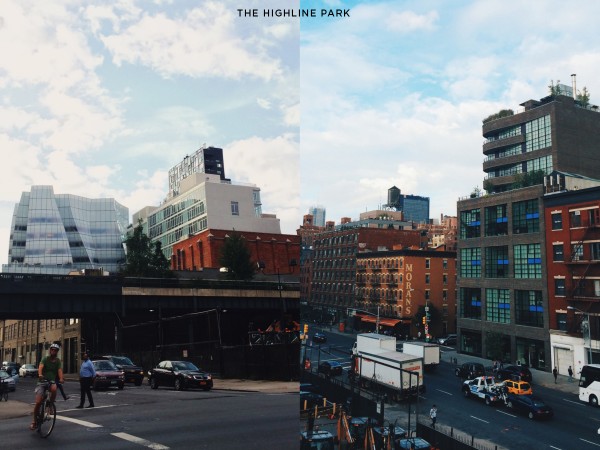 Finally in its last stage of development, the High Line park will always remain one of our absolute favorite destinations in NYC. You can pretty much do anything here - sightseeing, people watching, grubbing and shopping! It feels like you're part of this larger-than-life community that New Yorkers are privileged enough to enjoy every day. The Golden Hour with an exquisite view of the Hudson River are unfailingly impressive and romantic. 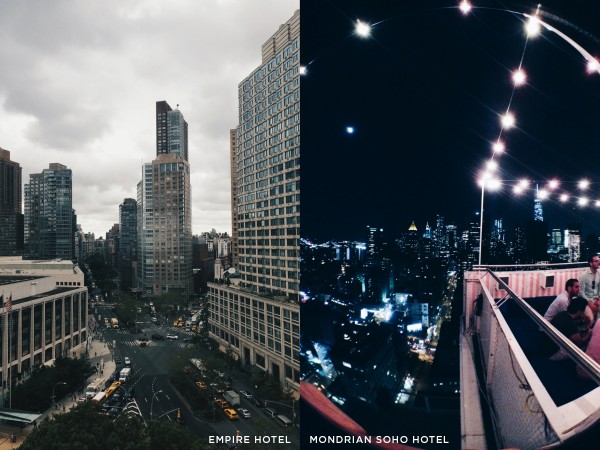 Staying true to the hotel-hopping spirit, we found ourselves at events at both the Empire Hotel as well as the Mondrian SoHo Hotel. Both equally chic and boasting sweeping views of New York cityscapes, these hotels are designed for you to have a good time. And we sure did by taking full advantage of the open bar, apps and treats. The stunning views, though, are so arresting that you'll be coming back for more. If you're feeling a bit overwhelmed or nostalgic, like us, head on over to the Hudson River pier and One World Trade Center (respectively). The gentle breeze at the piers will give you a peace of mind, before tackling the non-stop hustle and bustle of New York city. Our time in the city coincided with the 13th anniversary of 9/11 - it felt surreal to attend a runway show inside the new One World Trade Center building while paying our respect to this historical site that'll always remain a place of tragedy but also hope and faith for the future. 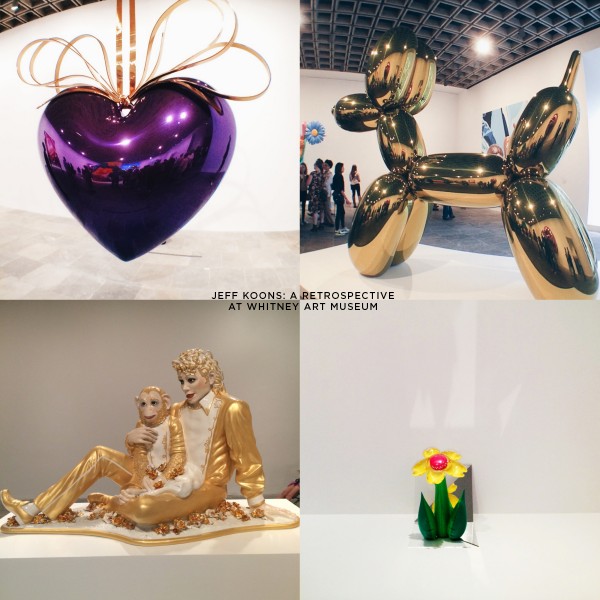 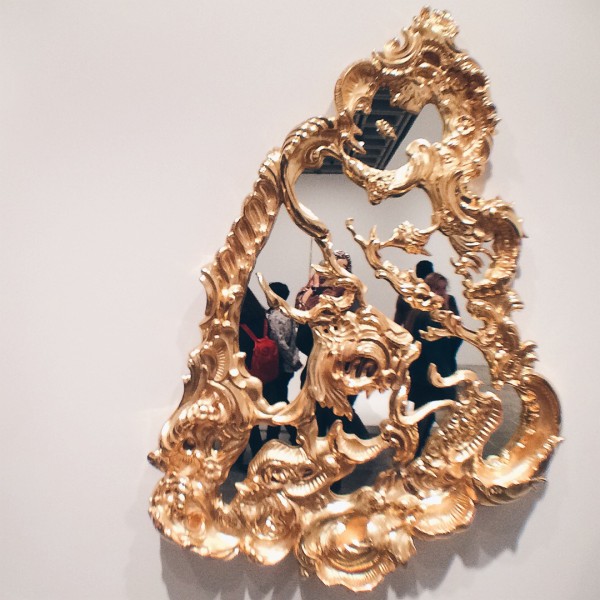 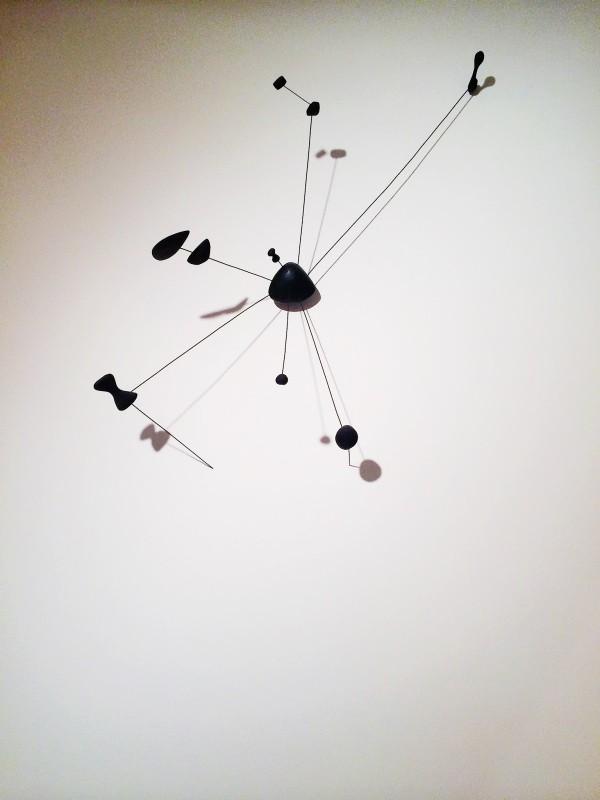 The currently on-going retrospective of Jeff Koons' phenomenal body of work is a must-see at the Whitney Museum of Art. And to think that we almost didn't make it! That would've been such a travesty. Along with the signature balloon dog sculpture, there are some amazingly lurid and NSFW masterpieces at this retrospective, which occupies a total of 3 floors, as well. Keeping Jeff Koons in good company are works from Edward Hopper, one of my all-time favorite painters (his more voyeuristic pieces makes him an OG-instagrammer), and Alexander Calder whom I saw not too long ago at the LACMA. Tip: This exhibit comes to an end on October 19th, 2014 - only a few more weeks before its gone!


We totally saved the best for last: Our culinary highlights of the trip. 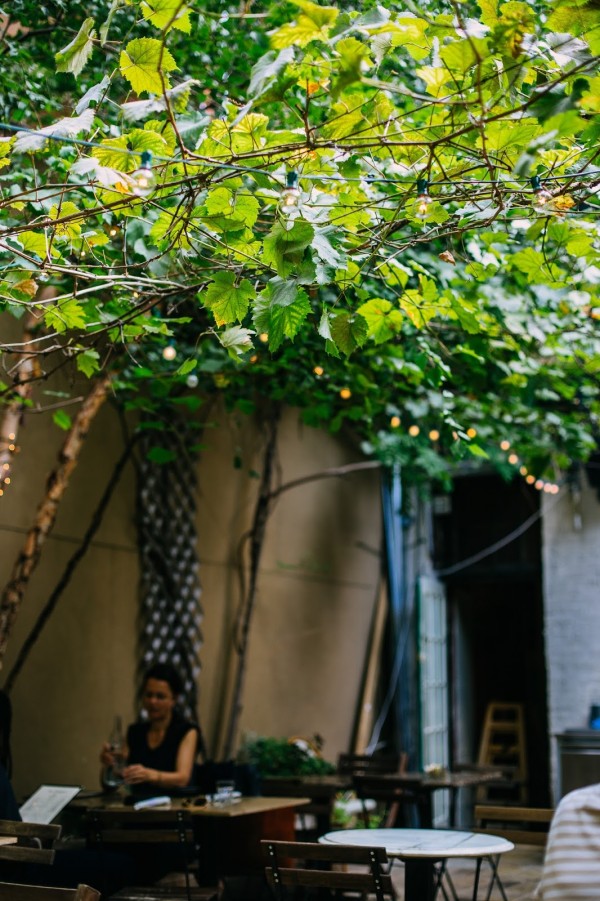 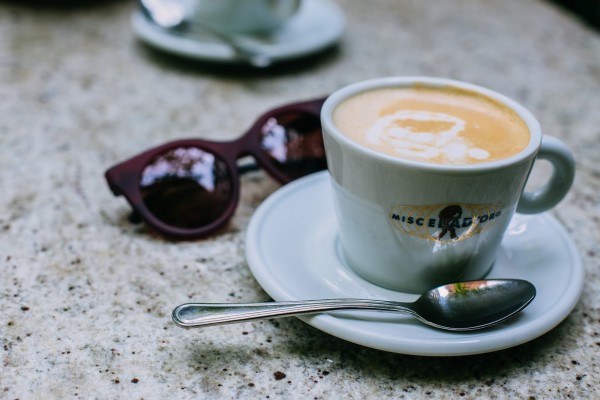 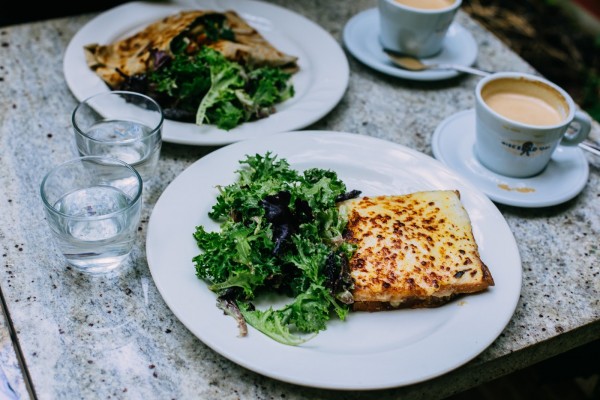 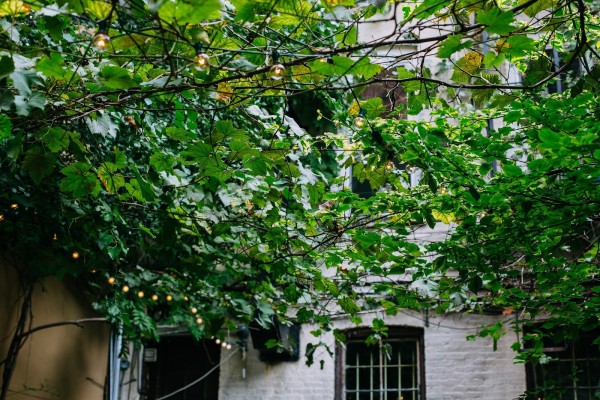 Le Gamin Cafe - If you happen to be in the Fort Greene neighborhood of Brooklyn, where we had a delightful stay for the last leg of our NYC adventure, you have to stop by Le Gamin. Not only does this unassuming cafe have the best Croque Monsieur these lips has ever touched, Le Gamin's mesmerizing outdoor garden with its exposed, leafy canopy will whet your appetite for ambience and light, Parisian fare. 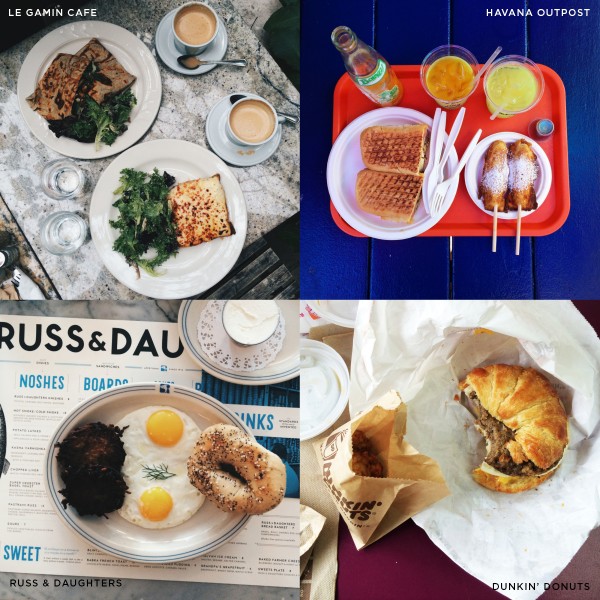 Habana Outpost - During our flight on Delta to NYC, we were treated to a complimentary viewing of the movie, Chef, thus igniting our cravings for a hearty Cubano sandwich. Order and you shall receive the most divine version of the Cubano at Habana Outpost. Yes, you should also order their version of fried chicken and waffles on a stick. Because carbs on carbs is totally #trending and #winning!

Russ & Daughters - If you're in the mood for smoked fish (and not just the gelfite fish variety) of all kinds, Russ & Daughters now has an actual dine-in location in the Lower East Side. Thanks to our close friend and Jewish insider, Ally Spier, we were finally able to feast on crispy, potato latkes and Matzo ball soup that is made for the soul.

Dunkin' Donuts - You just can't go wrong with a toasted buttery croissant, sausage and egg paired with a pack of over seasoned tater tots. Because why not? (Despite two locations that just recently opened up in the Los Angeles area) 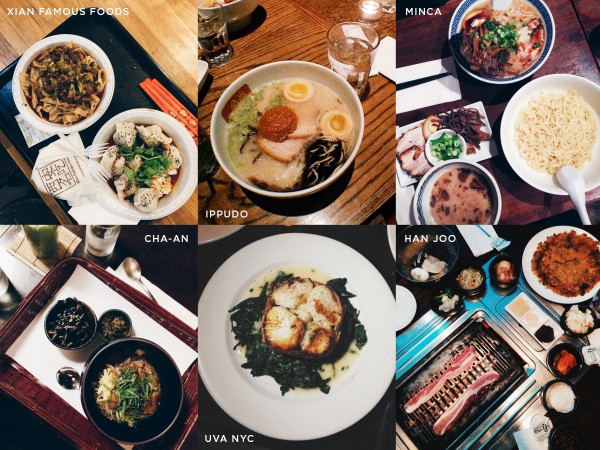 Xi'an Famous Foods - Not for the faint of heart or a weak stomach, Xi'an Famous Foods and I have had a lasting relationship since I first discovered them when I lived in New York. Now with three locations, it's still one of the best, not to mention affordable, joints to get your dose of ma la (numbing spice) on. My all-time favorite items there are the hand-cut, wide noodle with generous amounts of cumin lamb, the cumin lamb bun as well as the spicy cucumber served cold! Side note: They even have a monthly Instagram contest with a winning prize of $25 - I am not paid to say that, but I honestly wished they had a location here in LA.

Ippudo - Let me preface this by saying that LA still has the best ramen, in my opinion, purely because we have more options. But Ippudo is solid contender in NYC. I always opt for the Karaka Men for a flavorful soup base punctuated with a special blend of hot spices, with a side order of the unctuous pork buns.

Minca - Minca is a fine alternative to Ippudo and Momofuku Noodle Bar in NYC. I loved how much the atmosphere of the restaurant immediately transports you to some divey, ramen joint in the heart of Tokyo. The tsukemen I had was good - although the broth dip could be more piping hot rather than lukewarm. Flavor profiles were all there. The only drawback? It is cash only.

Cha-An - Another absolute NYC favorite of mine that needs a location in LA, Cha-An is an urban oasis, mental retreat and revered tea house all-in-one. Everything is delicately cooked, plated and delivered to you in a sanctuary-like environment that even extends into the restroom (it's so zen-like in there, trust me). Always, always get the daily special with an iced matcha float or a pot of gently-steeped Genmaicha tea.

UVA Restaurant NYC - After dining at UVA with our dear friends, Stephanie and Kyle, we couldn't believe how good of a steal it was. As much as we want to keep this our little secret, UVA's excellence and commitment to amazing Italian food deserved to be shared. The ambience is spot-on romantic. The wine-list was on point. The appetizers and entrees: mouthwatering. I couldn't believe how insanely well-executed my seared scallops - all five of them wrapped together with sizable bacon strips - were. And the cream spinach? Completely modernized with a white wine sauce. Done and done!

Han Joo - We came here an hour before it closed. The experience was at best pleasant, decent enough to satiate our hunger. Definitely had better in NYC's Koreatown. The cold Naengmyeon wasn't too bad nor mind-blowing, and the same could be said about the pork belly. Nothing too out of the ordinary, but if you have a strong hankering for Korean food when in the East Village - stop by. 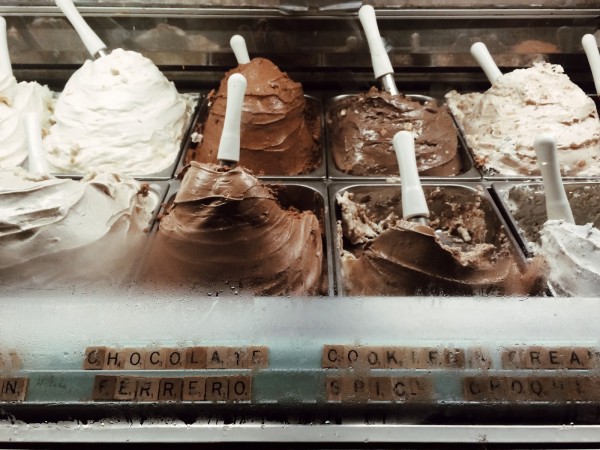 Fresco Gelateria - We like to keep our desserts light in general, especially if our dinner is particularly filling. Fresco met and exceeded our expectations - my rose water affogato blew my mind away. This is where all your wildest gelato dreams can come true.

We hope you enjoyed our tour of New York City highlights - all photographs are taken by me and Martin. Instagram photos are taken using OlloClip and edited in VSCO Cam.

Tommy Lei is the styleteller behind MYBELONGING, a high fashion, menswear and personal style blog from the heart.

Jeff Koons At The Whitney

First of all I love the Whitney, if for no other reason, because I still have an SVA sticker so...