A Brief History of the Suit: Part 1

A suit is the sartorial equivalent of the cultural and...

A suit is the sartorial equivalent of the cultural and biological man. It is the symbol of manhood and embodies elegance, dynamism, flair and other elements that define the ideal man.

Suits have been around for a very long time and, even though they did see a lot of change, their meaning and philosophical core have remained the same.

The history of the suit can be very easily analyzed if you break it into decades. Each decade of the 20th (and beginning of the 21st) century has left its mark on what the absolute suit is. The modern man’s suit is the result of all the development it went through, which were influenced by the social, economic and cultural issues and happenings of the decades that contributed to its form and style.

The 1900s were a big turning point in the history of men’s fashion and style. In the Western world, this decade represented the end of the Victorian era and a new beginning in men’s fashion. Leaving the very constraining (but very elegant) fashions behind, men discovered that they can look good and feel good at the same time. This is how the modern suit was born.

The Victorian frock coat was replaced by sack coats and lounge coats. During this time, men wore three-piece suits that consisted of a sack with a matching waistcoat or vest. These were often worn with contrasting trousers. Another option was to match your pants and your coat and to wear them with a contrasting waistcoat. These waistcoats usually fastened quite low and didn’t feature a collar. 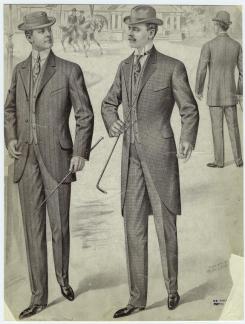 During this decade, pants were ankle high and featured turn-ups or cuffs and were creased both in the front and in the back. The space between the pant and the shoes was filled with short gaiters or spats. 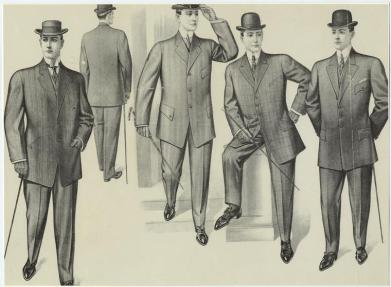 In the 19th century, there were very strict rules as to what one could wear, and breaking these rules was severely sanctioned. However, as things started to change socially and culturally, so did the clothes worn by men.

In the 1910s, suits remained almost unchanged, but their democratization kept on growing. During this decade, men also wore a lot of hats. The upper class wore silk top hat with their formal wear, while fedoras and flat straw boaters were now acceptable for a wider range of activities. Most men, especially those of the middle and the working class wore flat caps and newsboy hats. When traveling, the Panama hat was the hat of choice. 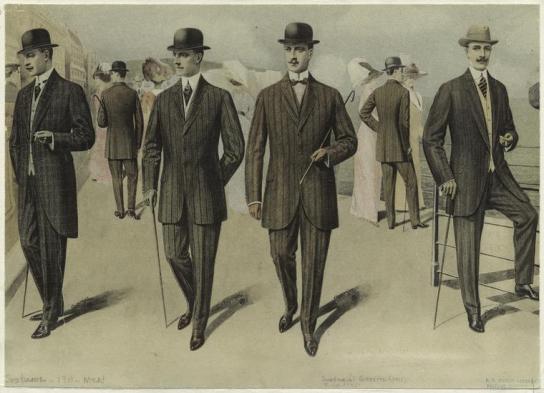 Because of the unfortunate WWI, fashion did not evolve much during this time, as people were more interested in having functional clothes rather than being fashion-forward. 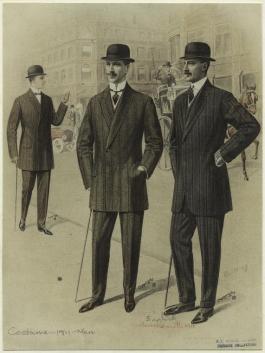 It is only normal that during crisis periods, fashions are practical and conservative. 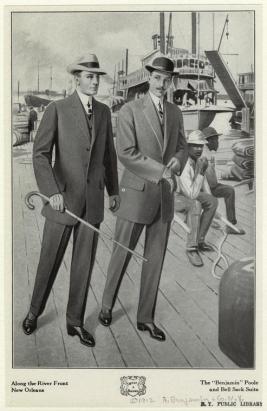 With the war finally over, the world was recovering and formality became a thing of the past. During the jazz age, men used to wear short jackets that featured two or three buttons in favor of long tailcoats and pinstriped suits. 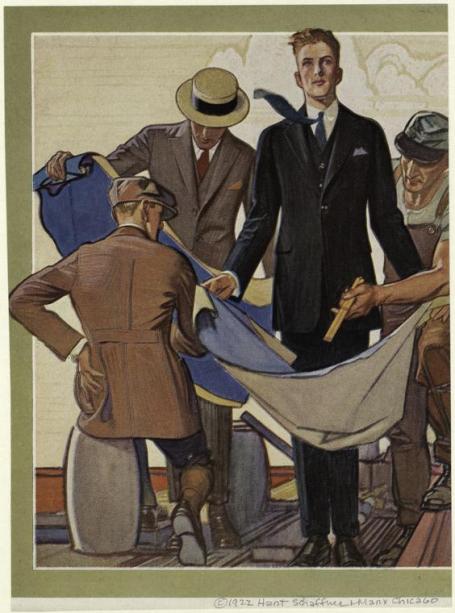 If you wanted to look formal, you would wear a black or dark-blue swallow-tailed coat trimmed with sating and you would match your satin-adorned pants to your jacket. A lack silk top hat, white gloves, a white bow tie, a white handkerchief made of silk, a white flower boutonniere and a pair of leather Oxford shoes were the way to go. This might look quite formal, but it was a look that was more relaxed than those worn during the long-gone Victorian era.

The 1920s were divided into two periods, sartorially speaking. In the early 1920s, men wore shorter jackets with high waistlines. The jackets of the 1920s were greatly inspired by the military uniforms of the First World War. You would think that they had had enough of those uniforms and wanted to forget everything that was associated with the war, but we can interpret this trend as a re-appropriation of the clothing associated with the war, which now had a new meaning.

Narrow lapels on jackets and narrow and straight pants were some of the staples of the first part of the 1920s. 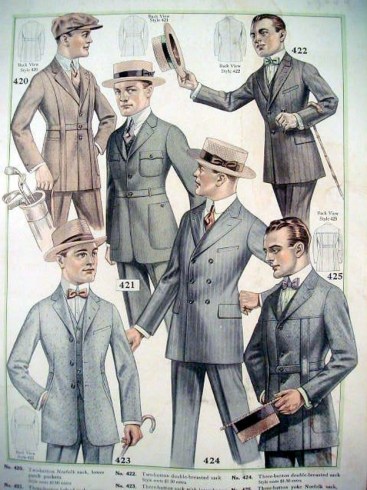 By the year 1925, wider trousers appeared in the mainstream fashion. In the second part of the 20s, jackets returned to their normal waistlines and the lapels became peaked and wide. Non-tapered, loose-fitting sleeves were also fashionable during this time. During the last years of the decade, men used to wear double-breasted vests, which they would pair with a single-breasted jacket. 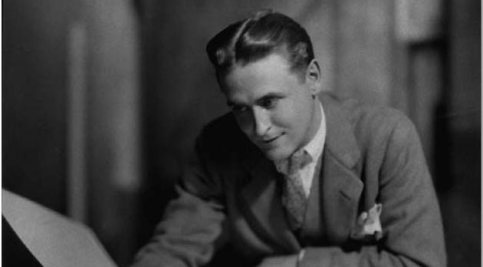 Hats were also fashionable, but they were still class-coordinated, as the upper class citizens wore top hats or Homburg hats. Men who were part of the middle class wore bowler hats, trilby hats or fedoras. In the summer, straw boater hats were in style for men from every class.

The 1930s represented the expansion of the 1920s’ ideas. This period represented a time when celebrities became very popular and everyone wanted to look like a movie star. The “drape cut” suit was the fashion took the world by storm with its flexible construction, more fabric in the shoulders, a slightly nipped waist, light padding, full sleeves tapered at the wrist. This suit was meant to enhance a man’s figure.

Around 1935, tapered pants became fashionable in the men’s fashion world. 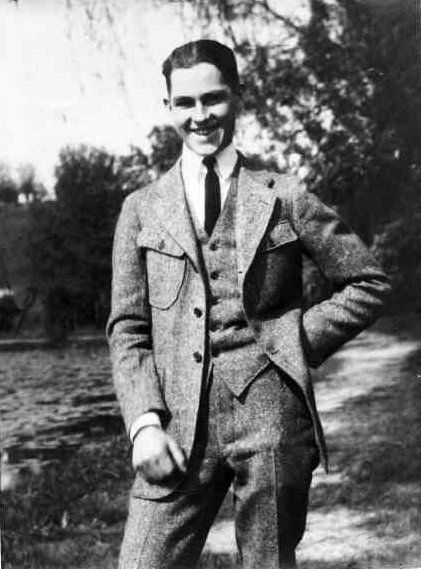 This new look was adopted by Hollywood celebrities such as Cary Grant, Fred Astaire or Gary Cooper who also wore loose-fitting coats and trousers. This point marked the beginning of a changing perspective of what a suit really is. 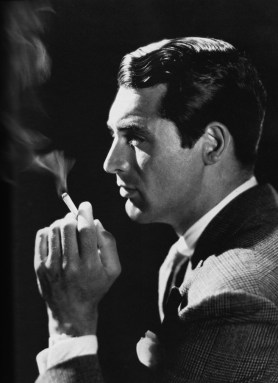 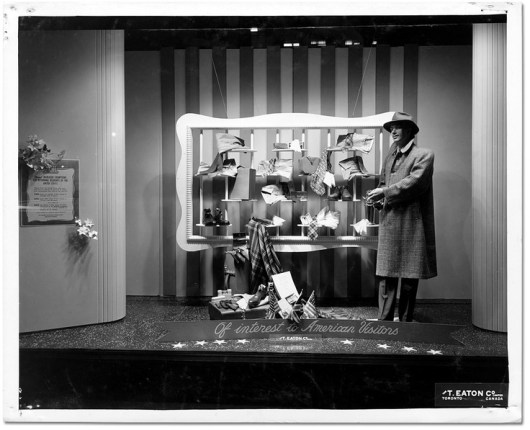 The 1940s represented a turn back to a minimalist look, as the world was shaken again by unfortunate events. There is not very much to say about the fashions of this era, except that the limited supply of materials determined the creation of a new minimalistic look. 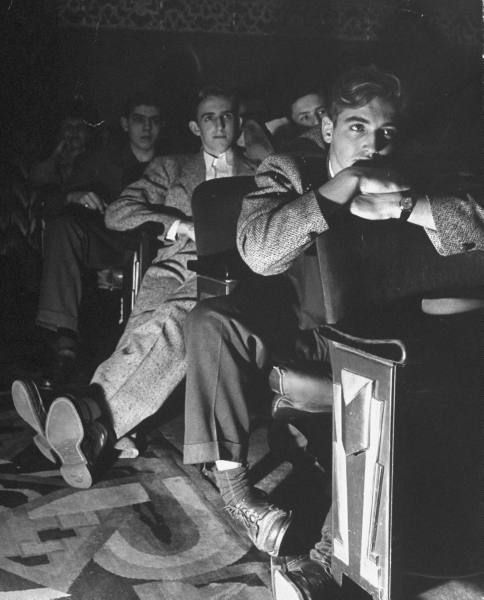 Just like the 1920s, the 1950s were a time in which everyone wanted or needed to escape from the war and dive into a new way of living. However, the 1950s were not such a liberal time as the 1920s, because the war had had a bigger impact on several nations and many people had lived through two world wars already.

After the war, men’s suits were mostly broad-shouldered and very often double-breasted. Because fabrics became more accessible, pants became fuller and generally featured cuffs. Bold accessories, bold details and bold cuts were all the staples of the 1950s suit. These styles were often worn by the new Hollywood stars who were more and more popular as cinemas expanded and television became more mainstream. 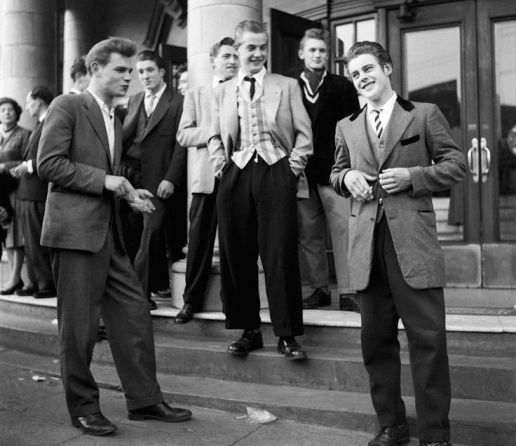 The 1950s was the first decade of the rebels, with men such as Marlon Brando marking breakthrough moments. For example, during that time, plain t-shirts were seen as underwear, so when Marlon Brando appeared wearing a white t-shirt with no shirt, it was as if he appeared in his underwear. 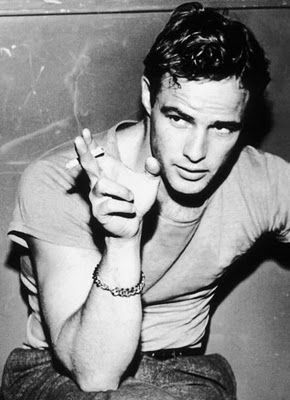 For the first time in the 20th century, masculinity could be expressed through something else than a suit. Here’s Marlon Brando wearing a plain white t-shirt.

Jeans also started to become more popular and leisure wear became part of everyday living. The 1950s marked the parallel development of two types of clothes: leisure clothes and work clothes, as many people used to work or spend their day far from home.

In the UK, Savile Row introduced the so-called “New Edwardian Look”, which featured a jacket that was slightly flared, natural shoulders and an overall narrow cut. This jacket was supposed to be worn with a curly-brimmed bowler hat and a long overcoat that featured a velvet collar.

Sports coats also increased in popularity and generally followed the lines of suit coats. Tartan plaids were modern in the early part of the 1950s, while in the second part, several types of checks were worn.

Corduroy jackets with leather buttons, chinos, and other casual pieces became highly fashionable items that existed in parallel to the new suits.

The first part of the 20th century definitely had a great impact on the definition of the suit, not so much in terms of design, as in terms of philosophical meaning, as more and more men had access to suits and therefore, the sartorial symbol of the man developed new meanings and new styles.

In part two of this guide, we will look at how the suit evolved from the 1960s until the teens of the 21st century.

P.S. Which styles do you like best? Is it the sharp, minimalist look of the 1940s or the loose style of the 1930s and 50s? Share your thoughts, questions or feedback on the article in the comments below! For more style advice, fashion tips and cultural insights, you can subscribe to Attire Club via e-mail or follow us on Facebook or Twitter!

The post A history of the suit: Part 1: 1900s – 1950s appeared first on Attire Club by Fraquoh and Franchomme | Men's Style, Fashion And Lifestyle.

Funny Fashion Laws From Around the World

A mugshot from the 1920s The world is full of laws that are strange and sometimes very funny at the...